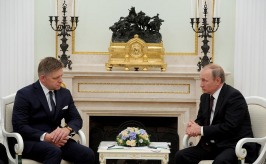 Vladimir Putin met with Prime Minister of Slovakia Robert Fico in the Kremlin.

President of Russia Vladimir Putin: Mr Prime Minister, friends, welcome to Moscow. We are very pleased to see you.

Unfortunately – I have to say this – unfortunately, our bilateral trade has been decreasing for the past few years, but we nevertheless have an opportunity to reverse this trend and keep moving on. Russia is still one of your country’s largest trade and economic partners.

As far as I know, Slovakia is currently presiding in the Council of the European Union. We hope that we will be working with you as President of the European Council to improve our trade and economic ties with Europe, considering that our trade had decreased by almost a half.

In a word, there are many issues we need to discuss. We are glad to see you. Welcome.

Prime Minister of Slovakia Robert Fico (retranslated): Mr President, thank you for your kind words. We have many projects and proposals in mind, and we will be happy to discuss them.

I believe that we should use this intergovernmental commission more effectively. I think that the next time we will meet during the commission’s meeting will be in early 2017. We do not see any reasons why trade between Russia and Slovakia should decrease either.

We do look at things realistically and recognise objective reasons and objective factors, but we also need to do our best to restore the scope of trade we had until recently.

Taking over the Presidency of the European Union from July 1 to December 31, 2016 is a great honour for Slovakia. This means a lot of work needs to be done by the Government, but we are grateful for this opportunity, as we are more actively involved in the European process.

We took over the EU Presidency only a short time after the UK decided to exit the European Union. Several European prime ministers met in Paris earlier today to discuss what the European Union should be like with only 27 members instead of 28. This is not a simple issue, because some EU member states are also part of the Eurozone, and some are not.

Mr President, the good relations that exist between the Slovak Republic and the Russian Federation give us every opportunity to return our economic and other contacts to the level we had until recently.

If possible, I would like to discuss several issues today. I mean specific problems, such as the Cyclotron project, which has been unprofitable for years. Then there is cooperation in education and culture; and we have things to discuss about large energy projects.

Further on, I would like to briefly discuss sport, as well as the new UN leadership – something that concerns all of us. We have a good candidate to nominate, and we will try to gain your support. I hope that we will be able to discuss all these issues in a friendly atmosphere.

Vladimir Putin: We will certainly do so. Once again I would like to emphasise that we are happy to see you and to discuss all these issues.