Meeting of the «European Club» in Hamburg 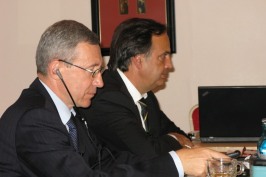 On 24 June 2011 Hamburg hosted a meeting of the parliamentary «European Club» devoted to Russian-German relations in the context of Russia-EU cooperation and to the prospects of creating a common European transport infrastructure. Members of the Federal Assembly of the Russian Federation and of the European Parliament, Governor of the Kirov oblast Mr. Nikita Belyh, Director-General for mobility and transport of the European Commission Mr. Matthias Ruete, Deputy Permanent Representative of Russia to the EU Mr. Alexey Polishchuk, Consul General of Russia in Hamburg Mr. Sergey Ganzha as well as Russian and German businessmen, including Vice-President of JSC Russian Railways Mr. Alexander Saltanov and CEO of Deutsche Bahn AG Mr. Rüdiger Grube were among the participants.

The meeting emphasized the importance of the Russian-German cooperation for the development of strategic partnership between Russia and the EU. Participants also discussed the prospects of implementation of joint projects aimed at European transport infrastructure development.