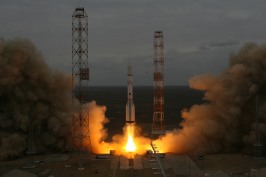 The Proton-M launcher and the Briz-M upper stage were developed and produced by the Russian Khrunichev Space Centre, while TGO and Schiaparelli spacecraft were manufactured by the Franco-Italian Thales Alenia Space company.

10 minutes after lift-off, the Briz-M upper stage, as well as the TGO and Schiaparelli spacecraft separated from the third stage. Breeze-M will further deliver the spacecraft into the orbit. On 14 March at 23:13 MSK (21:13 CET) the TGO/Schiaparelli block should separate from the Briz-M to continue its journey and eventually enter the Mars orbit in October 2016.

The Schiaparelli demonstration landing module will help develop the technology for landing on the surface of Mars. The Trace Gas Orbiter will study atmospheric trace gases present in the Martian atmosphere and distribution of water ice in the planet’s subsurface using, in particular, Russian equipment developed by the Space Research Institute of the Russian Academy of Sciences. The spacecraft will also retranslate data from the Schiaparelli module and the Mars rover at the next stage of the mission.