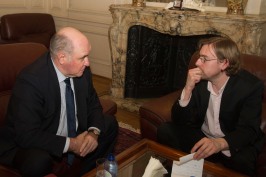 Europe beyond the EU

Existing relations between Russia and the European Union will not be undermined by recent comments made by the European Parliament that Russia needs to investigate the recent presidential elections.

In an exclusive interview granted to New Europe, Grigory Karasin, Deputy Minister of Foreign Affairs of the Russian Federation, said that the new president will listen to the concerns of citizens following the 4 March election, and that he will embrace the new dynamics of Russian society.

MEPs accused the election as being fill of “irregularities” and urged the new president, elected for a third term, to engage in a dialogue with the protesters.

Mr Karasin said that ongoing reforms were already in place in Russia, and that Mr Putin is ready to talk with all sections of Russian society who contested both the presidential and December parliamentary elections.

Protests over the recent elections highlighted that Russia is becoming a more questioning society, Mr Karasin told New Europe, who added that President Putin will address such concerns. The President, he said, will welcome the opportunity to engage with the citizens. Outside criticism by bodies such as the EU is not unwelcome, but, says Mr Karasin, must be made in the spirit of constructive friendship.

According to Mr Karasin, moves by Russia to expand the current Eurasian Union need not be considered a threat to Russian relations with the EU. “We have a good tradition, established five years ago, to come together with EU officials to discuss our relations with CIS countries, and we have in that time achieved with Brussels a considerable level of transparency”, he said.

“We have discussed our plans and our problems with the so-called post-Soviet countries, and we consider the EU to be a very important partner; we live next to each other, and we want not only to communicate, but to cooperate, and to develop an atmosphere of economic, social and cultural interaction”.

In addition to maintaining key relations with the EU, Mr Karasin also said that Russian will continue to advance economic and political ties with neighbours in central Asia and the Caucuses, and welcomed the recent announcement by Moldova to finally grant the presidency to Nicolae Timofti, which, says, Mr Karasin, will help aid bring much needed stability of the situation in the Transnistrian region.

Putin is ready to listen to the people

Grigory Karasin: Russia is ‘on the eve of a period which is to bring new quality to the society’

In a wide-ranging interview, Grigory Karasin, Deputy Minister of Foreign Affairs for the Russian Federation, grants an exclusive interview to New Europe’s Editor in Chief, where he talks about foreign policy priorities for Russia in areas such as Transnistria and Georgia, as well as relations with the EU, in addition to domestic challenges following the third electoral victory of Vladimir Putin on 4 March.
By Cillian Donnelly

Grigory Karasin, Deputy Minister of Foreign Affairs of the Russian Federation said that Putin, elected once more to the presidency following the 4 March election, will engage with the people to create a new political atmosphere in the country. Mr Karasin said that Russia is becoming a “more dynamic” society, and one that is evolving economically and politically both domestically and through improved relations with its neighbours.

“We had a very dynamic atmosphere following the December elections to the state Duma,” says Karasin. “There were public demonstrations, and everyone understood that the country has become more dynamic. People want to ask more questions of substance, and they now have a tendency to have a more critical attitude to several spheres of economics, social life and politics.

“I am quite sure that the political elite of the Russian Federation heard that signal. President Putin will undoubtedly take measures to satisfy the public interest, and he has already mentioned that in a number of his public statements and articles. We are on the eve of the third term of President Putin, and with a society that is more demanding than before. It will be an interesting and important period in our history.”

His comments come as the European parliament in Brussels have condemned the recent presidential election, citing “irregularities” and saying that Putin must now have a “sincere dialogue” with the protesters. MEPs also asked for Dmitry Medvedev to immediately initiate political reforms. According to Karasin, comments of this kind are not unwelcome, provided they are “not overly politicised or unfair, but practical and aimed at better co-op between us”.

Reforms, he says, have already been introduced, and will be carried out “according to our own national interests and practices, but this doesn’t mean we will not consider the views of our European partners,” and partnership with the European Union is still a vital aspect of Russian foreign relations, he says.

“We have a good tradition, established five years ago, to come together with EU officials to discuss our relations with CIS countries, and we have in that time achieved with Brussels a considerable level of transparency, we have discussed our plans and our problems with the so-called post-Soviet countries, and we consider the EU to be a very important partner; we live next to each other, and we want not only to communicate, but to co-operate, and to develop an atmosphere of economic, social and cultural interaction”.

But some commentators on the European side have wondered how long-term relations between the EU and Russia will be affected by Moscow’s desire to expand upon the existing EURASEC customs and trade agreement into a wider economic union by 2015. According to Karasin, this will not negatively affect current relations, but instead strengthen them, along with relations between Russian and other key international partners.

“We hope that this will contribute to a much more close co-op with our Europe partners, he says , “and with the US and our eastern neighbours, including China. There is still a vast territory of problems which still need to be resolved, and we hope this will be understood by our partners in the European Union”.

According to Karasin, the development of the Euarasian Union will be a key foreign policy priority for Russia over the next few years, but that it is important that neither Brussels nor Moscow encourage two opposing power blocs, suspicious of one another. Prosperity and security, he says, are the key motivations behind the policy.

“Of course, one of our major priorities is to develop good relations with our immediate neighbours and making those neighbours prosperous and and stable. But it doesn’t mean that further integration with the existing customs union will erase those relations with countries outside. We will welcome more countries from the commonwealth [CIS] joining, but with certain conditions, of course. I would say that it is the most important priority, that it will be the cornerstone of relations in that geographical area”.

While Karasin says that the existing agreement will move beyond current trade arrangements into more political relationships, he says this will not be something that will become immediately apparent. “We will begin with economics, that is the way ahead. People have to feel the results for themselves,” he says, re-stating that good relations between Russia and it neighbours in central Asia and the Caucuses, will “only be a positive factor in EU-Russia relations”.

“We will have a difficult period of explanation for what are the intentions,” he admits, but adding that “when you see the intentions quite obviously, quite vividly, people start to see things in a more positive light”.

This note of optimism also seems to spread to the difficult problem of Transnistria, the breakaway strip of land between Moldova and Ukraine. After 917 days, the people of Moldova finally settled on a new president, Nicolae Timofti, from the Alliance for European Integration, which Karasin hopes will lead to positive movement of the situation.

Despite the recent political gridlock, he continues, there has been some recent political developments, mainly through the ‘5+2’ political meetings, with representatives from Moldova and as well as Ukraine, Russia, the EU, United States and the OSCE. A recent meeting in Dublin, he says, “was not a breakthrough”, but an important meeting nonetheless as dialogue was initiated. A further meeting is scheduled for the end of April.

“The problem of Transnistria is quite interesting”, says Karasin. “On the one hand, we have not yet finally settled the problem of stability in Moldova, bit hopefully we will get a positive result, and this will give the necessary conditions to be more resolute on the Transnistria question. When you have an unstable situation, nobody knows what to do decide, and who should decide it!”

“In Transnistria, the latest elections brought to power a young and, in my view, very openminded man [Yevgeny Shevchuk], who is obviously more flexible than his predecessor, and we hope that the new administration will manage to settle some of the practical measures with its neighbours. The Russian position is still the same. We want one solution: special guaranteed status for Transnistria within the Moldovan State.

“In my view the situation that was left after aggression of August 2008, is the situation that will last for many decades. No one at present can think of the South Ossetian people wishing to go back to live in the Georgian state. Georgians need to prove that living together is possible, but this will take considerable time. It will not take simply a year or two”.