Inauguration of exhibition “The Path to Victory” 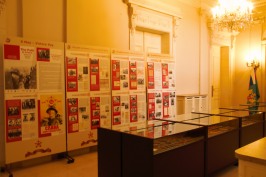 On 9 May 2020 exhibition “The Path to Victory” dedicated to the 75th anniversary of the Victory in the Great Patriotic War was inaugurated in the premises of the Russian Permanent Mission to the EU. It will begin its work immediately after the quarantine measures are eased.

The stands show various stages of development of the situation during World War II, unveil the victorious path of the Red Army that liberated many European countries from the Nazis, describe the history of creation of the anti-Hitler coalition.

A place of honour is attributed to the stand “Our Immortal Regiment” presenting photographs and biographies of veterans – relatives of the Permanent Mission staff.

The exhibition displays rank insignia of servicemen of the Red Army and Navy, NKVD troops used during the Great Patriotic War. Part of the exposition is dedicated to epaulettes introduced in early 1943. Exhibits include items belonging to outstanding Soviet military and naval commanders: Marshals of the Soviet Union Konstantin Rokossovsky, Alexander Vasilevsky, Fedor Tolbukhin, Fleet Admirals Nikolay Kuznetsov and Ivan Isakov, Chief Artillery Marshal Nikolay Voronov, Chief Air Marshal Alexander Novikov, Marshal of the Corps of Engineers Mikhail Vorobyov and others. A prominent place is devoted to design samples of epaulettes designed in 1944 for the supreme command staff, as those made in 1945 for the Generalissimo of the Soviet Union.

The exhibition was organised with the assistance of the Russian Historical Society, Russian State Library of Arts (Moscow) and History of Motherland Foundation.