Inauguration of the exhibition “From Moscow to Berlin” 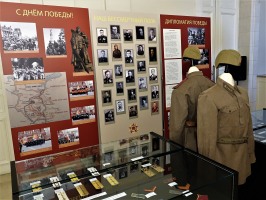 On 8 May 2018 on the occasion of Victory Day the Permanent Mission of the Russian Federation to the European Union inaugurated an exhibition “From Moscow to Berlin”.

The exhibition, dedicated to the 75th anniversary of introducing new rank insignia, namely epaulettes, in the Soviet Army and the Navy includes authentic rank insignia (epaulettes, collar patches and shoulder stripes), pieces of uniform used by soldiers during the Great Patriotic War, as well as colours of military units. Many items had never been exhibited before. Among such pieces are authentic epaulettes of Marshals of the Soviet Union Aleksander Vasilevsky, Konstantin Rokossovsky, Ivan Konev and Admiral of the Navy of the Soviet Union Nikolay Kuznetsov.

The exhibition was opened by the Permanent Representative of Russia to the EU Ambassador Vladimir Chizhov. Participants included representatives of diplomatic corps, journalists and historians.