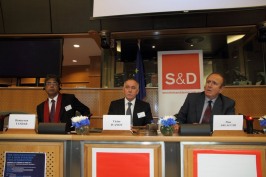 On 27-28 June 2011 Victor Ivanov, Chairman of the Russian State Anti-Drug Committee, Director of the Federal Service for Narcotics Traffic Control, took part in the Conference on the Implementation of a New Strategy for Afghanistan organised in Brussels by the Group «Progressive Alliance of Socialists and Democrats» in the European Parliament.

He proposed that a joint five-year Russia-EU plan be elaborated on the basis of the Russian «Rainbow-2» plan and anti-drug provisions of the report on a New Strategy for Afghanistan by Pino Arlacchi, MEP, approved by the European Parliament in December 2010.

V.Ivanov called upon Russia and the European Union to set up a joint agency which could contribute, in cooperation with the UN, the Collective Security Treaty Оrganisation and other international organisations, to create a stable system of European and Eurasian anti-drug security.