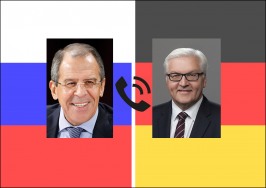 On August 9, Foreign Minister Sergey Lavrov had a telephone conversation with the OSCE Chairperson-in-Office and German Federal Minister for Foreign Affairs Frank-Walter Steinmeier, at the latter’s initiative.

The parties discussed the current issues related to the implementation of the Minsk Package of Measures to resolve the situation in southeastern Ukraine. They noted the need to coordinate steps to achieve a political settlement of the internal Ukrainian conflict with the resolution of security issues.

The ministers exchanged opinions on Syrian developments, international assistance in resolving the Syrian conflict with focus on the resumption of an all-inclusive dialogue between the government and the opposition in line with the Geneva process, more effective efforts to combat terrorist and extremist organisations and the need to address humanitarian issues.

The ministers also discussed some issues on the Russian-German agenda, including a timeframe for further bilateral contact.