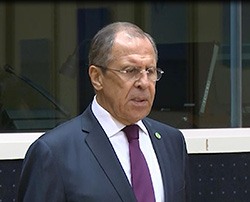 Foreign Minister Sergey Lavrov’s statement and answers to media questions following a meeting of the Committee of Ministers of the Council of Europe, Brussels, May 19, 2015

This meeting of the Committee of Ministers(CM) of the Council of Europe is of special importance. The situation in Europe is complex. There are too many irritants and conflicts, and relations between Western nationsand the Russian Federation are worsening in general, among other things, over the Ukraine crisis, which of course did not erupt on its own. It reflects the systemic problems that have built up in the European security system for years, the root cause being that the commitments to prevent new dividing lines and to eliminate old ones have not been honoured for years. The Council of Europe (CoE) has a unique significance, since it is the only pan-European organisation that is based not on political declarations but on the clear-cut foundation of international law: the Statute and numerous conventions, ensuring a single legal space for all European countries without exception.

Today, we have sought to use the Committee of Ministers meeting to urge strict compliance with the basic principles and values of the Council of Europe, which, to reiterate, are the same for all and should be followed by all in equal measure.

This discussion was significantly facilitated by a report presented by CoE Secretary General ThorbjørnJagland devoted to the human rights situation and the rule of law on our continent. The main conclusion that we made after studying this important document is that the scope of problems in Europe is not shrinking but expanding. According to the report, problems with human rights and the structure of the judiciary exist in the majority of CoE countries. So there should be no room here for any attempts to apply ateacher-student logic. Everyone should in equal measure meet the universal values and principles enshrinedin the conventions of this pan-European organisation.

At this meeting, we focused on combatting the mounting threat of extremism. An important document on combatting terrorism and extremism has been adopted, spelling out the underlying principles of cooperation in this area. A plan of action to implement this declaration was also adopted. An important decision was taken to approve the Protocol to the Council of Europe Convention on the Prevention of Terrorism (CECPT),adopted in 2005,aimed at mobilising joint efforts to counter the new threat, i.e., foreign terrorist fighters who are being recruited in countries on this continent to commit terrible deeds in the Middle East and North Africa in the context of the conflicts in Syria, Libya, and other countries of the region, and who return to their home countries and pose a serious threat to the security of states.

I would like to pay tribute to the Chairman of the Committee of Ministers of the Council of Europe, Deputy Prime Minister and Minister of Foreign Affairs of Belgium Didier Reynders, who has held this post for the last six months and is transferring his powers today to the next chairman. We are also grateful to the Secretary-General of the Council of Europe Thorbjørn Jagland, who together with the Chairman of the Committee of Ministers has made every effort to facilitate a political settlement and dialogue between all parties to the conflict in Ukraine.

The Council of Europe has adopted a special action plan to support the efforts aimed at calming the situation. The CoE has recently established 25 offices in all Ukrainian regions with the purpose of helping to address issues related to local governance and decentralisation of power. We have called on the Council of Europe and its representatives to be guided in their activity, especially when dealing with issues of decentralisation, by the relevant articles of the Minsk Agreements of February 12.

We have also supported the continued involvement of the Council of Europe in the effort to investigate the crimes on the Maidan and in Odessa. We believe it is important to extend the CoE mandate in this area to cover incidents that have occurred in Ukraine over the past year. Justice must be restored, and all those responsible for these crimes should be held accountable.

There are also other very important areas on which the CoE is beginning to act in response to the Ukraine crisis, chief among them being constitutional reform. Constitutional reform in Ukraine is not currently guided by the Minsk Agreements, which require the involvement of Donetsk and Luganskrepresentatives in this process. We urged the CoE Secretary General and all CM members to ensure that the work on constitutional reform, as well as judiciary reform and the implementation of other long overdue reforms in Ukraine, fully take into account the agreements stipulated in the Minsk documents of February 12.

I think there is a growing understanding that establishing direct dialogue between Kiev, Donetsk and Lugansk is the most important step.This is the key to resolving the crisis and the main focusof the Minsk Agreements of February 12, and it’s what everyone should be guided by. Until recently, Kiev has been dodging this, supplanting it with new ideas and formats not stipulated in the Minsk Agreements of February 12. Generally, to reiterate, despite the emotional outbursts on one side or the other, the CM meeting has shown that there is a growing concern with the current situation and a growing need to overcome old phobias and join ranks, because the challenges we faceare common to all states on the European continent. I hope that the results of the meeting will help consolidate the CoEon the principles on which it was founded after World War II and the defeat of Nazism.

During my visit to Brussels, I held talks with Secretary General of the Council of Europe Thorbjørn Jagland and High Representative of the European Union for Foreign Affairs and Security Policy Federica Mogherini, with whom I discussed the Ukrainian crisis and the depressing state of relations between Russia and the EU due to Brussels’ termination of all channels and mechanisms of interaction. There has been some progress on this front.

Our colleagues supported the continuation of the conversation on economic cooperation between Ukraine, EU, and Russia, and more broadly the Eurasian Economic Community, which began yesterday at the level of the "troika" of ministers of Russia, the EU, and Ukraine. On the whole, yesterday's talks ended on an optimistic note. Hopefully, the agreement to continue them will produce an outcome that makes it possible to harmonise the participation of the Ukrainian state in integration processes in the west and the east of Europe.

With the EU High Representative for Foreign Affairs Federica Mogherini, I discussed the unfolding situation with regard to the inflow of illegal migrants from North Africa, primarily through Libya, to the European Union. Brussels has come up with an initiative that includes using naval forces to put an end to this criminal practice.

The initiative was approved yesterday at a meeting of the EU Foreign Affairs Council. Ms Mogherini said that this initiative will be submitted to the UN Security Council. We have not yet seen the details of these proposals.

We will study them when we receive them, taking into account the need to stop illegal migration and prevent terrorists from using these migrant flows, as well as the need to comply with the fundamental norms of international law, especially international humanitarian law and the law on refugees and displaced persons.

Question: The Council of Europe has recently adopted a resolution to the effect that Russia should not block but rather assist the Council of Europe’s competent authorities in their visits to Georgia’s “occupied territories” in order to monitor compliance with human rights? Will Russia act upon this resolution?

Sergey Lavrov: I’m not aware of the statements and decisions regarding requirements for Russia to ensure access to, as you put it, the “occupied territories” in Georgia. I’m aware of no such territories. What I know is that there are two new states in the Caucasus which declared independence after the then Georgia's President Mikheil Saakashvili gave the criminal order to use the Georgian armed forces against his own people in August 2008.

These two independent states are real. They are recognised by Russia and are our allies. We certainly support the all-round economic, political, and all other forms of development of these states. We cooperate with them to ensure their security in order to avoid reckless gambles like the one that occurred in August 2008.

Regarding access of international representatives to their territories, they need to talk to them. As far as I know, such visits take place regularly. Abkhazia and South Ossetia are visited by representatives of European and other states. As we are told in the course of our regular contacts, the governments of these countries are open to a candid and respectful dialogue with international institutions, be it the Council of Europe, the UN, or the OSCE. It is important to do so without trying to distort the situation or to ignore the new realities in the Caucasus.

Question: What are your expectations regarding the forthcoming Eastern Partnership summit in Riga?

Sergey Lavrov: I’m not going to speculate on expectations. We cannot impose any decisions on the European Union or its partners. We want only one thing, and our colleagues in Brussels have been aware of this for a long time now. We want the processes that are unfolding between the EU and the countries wishing to promote their economic, cultural and other relations with the European Union not to hurt Russia’s legitimate interests. We want the EU's relations with its partners to take into account the integration processes in Eastern Europe and to seek to harmonise, not disrupt them, which, unfortunately, is the case now. Any attempts to portray the situation as a zero-sum game lead to undesirable and unfavourable results. Our European partners realise this. They assured us (including High Representative of the Union for Foreign Affairs and Security Policy Federica Mogherini during yesterday's talks) that the Eastern Partnership will not harm Russia's interests. These are the right words, but we would like them to be backed up by concrete actions. Let's see whether this happens at the summit in Riga.

Question: What are your expectations regarding the upcoming meeting with NATO Secretary General Jens Stoltenberg? Are relations between Russia and NATO improving?

Sergey Lavrov: I met with Jens Stoltenberg at his request on the sidelines of the Munich Conference on Security Policy in February. A similar request was made in connection with my stay here in Brussels at a meeting of the Committee of Ministers of the Council of Europe. We never avoid contacts. These are, in fact, the reasons for today’s meeting.

The contacts and the mechanisms of interaction between Russia and NATO used to be very intensive and diverse, but the North Atlantic Alliance has frozen them. Let’s hear what they have to say to us.