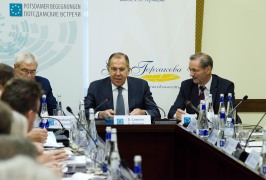 Thank you. I hope I have not disrupted the pace of discussion. I want to say a few words for the sake of protocol. We appreciate cooperation that is developing under the auspices of the Potsdam Meetings. I am grateful to you for inviting me. We highly value the efforts taken by the Alexander Gorchakov Public Diplomacy Fund and the German-Russian Forum to organise these conferences.

They invariably attract respected participants and create an environment conducive to discussing current issues on the bilateral and international agendas. By and large, these meetings have become an integral part of interaction between Russian and German civic societies. Of course, efforts that help overcome stereotypes and hackneyed clichés and abandon a black-and-white view on reality are especially important in the current situation in Europe and the rest of the world.

The theme of this meeting, Europe from Lisbon to Vladivostok: The only Way to Europe’s Stability, is of immediate interest. As we said more than once, a unique and very practical opportunity was missed after the end of the Cold War, a chance to get rid of the war’s legacy once and for all, to erase the dividing lines and to lead the continent we share towards peace and prosperity to the benefit of the present and future generations. There were the necessary conditions for this in place, because ideological differences were laid to rest and their symbol, the Berlin Wall, was knocked down.

President Vladimir Putin spoke in detail about why we failed to do this at a meeting of the Valdai Discussion Club on October 27. I would like to say that Russia has made a tangible contribution to the removal of the confrontation era legacy, including by pulling its troops and armaments out of Germany and East European and Baltic countries. Throughout these years we have been doing our best to strengthen mutual understanding and promote fruitful mutually beneficial cooperation in many areas, from the economy and trade to crisis management and counterterrorism.

Many of those who are present here probably remember that in 2008 we proposed signing a European Security Treaty to codify the parties’ political commitments on equal and indivisible security, which were declared in the late 1990s and early 2000s at the OSCE and the Russia-NATO Council. Unfortunately, our initiative was rejected, because the NATO countries decided that legal security guarantees can be extended only to bloc members. It was a deliberate policy for preserving the dividing lines in Europe. We still feel the consequences of this mentality. Our large-scale infrastructure and energy projects, including Nord Stream, were designed to promote sustainable development of all European countries. We had the same goal in mind when we proposed creating a Russia-EU energy alliance. We worked hard to remove the visa barriers as an obvious anachronism that keeps back the development of trade, investment, cultural and humanitarian ties and relations between people.

Unfortunately, the West has not supported our sincere efforts to develop a broad partnership – we sincerely wanted this – and our desire to make this partnership truly strategic. I do not want to be indiscriminate, because some Western countries were willing to meet us halfway, but bloc solidarity and discipline based on the all-or-none principle ultimately made our Western partners reject our proposal. They failed to abandon the friend-or-foe mentality. As you know – this has been discussed at length recently – they did not honour their pledge not to expand NATO eastward. Attempts have been made within the Eastern Partnership Programme to force post-Soviet countries to make an unnatural choice between “us” and “them,” in accordance with the logic of the zero sum game.

Shortly after Russia had embarked on a path of progressive development and overcome the 1990s crises, we ran into a new edition of the "policy of containment" directed against us. This policy also manifested itself in the coup and the violent seizure of power in Ukraine, which was supported by Washington and Brussels, and the introduction of unilateral sanctions against Russia. The US plans to deploy the European segment of the global missile defence system, and NATO's actions to conduct an expedited militarisation of Eastern Europe, the Baltic countries, and the Black Sea and the Baltic Sea are also part of that policy.

Of course, the European elite has discussed such a course of action before implementing it. We followed these discussions. In the end, at least as of this writing, the major part of the European establishment proved to be unable to resist the pressure from overseas and had to blend in with the anti-Russian context. Meanwhile, Europe (it is not a secret) is not gaining any additional clout in international affairs, and is faced with a number of major challenges ranging from the implications of the financial and economic crisis to increased terrorist threat and massive influx of migrants. Clearly, creating individual safe havens is no longer an option in today's interconnected world, and common problems – we see the proof of it every day – can only be resolved through collaborative efforts.

Our consistent belief is that providing Europe, including the European Union, with a proper place in the new polycentric world order system is unlikely to succeed without combining the capabilities of all states. If we look back into history we’ll see that any attempts to isolate Russia had invariably led to grievous consequences for the entire continent, whereas active involvement of our country in European affairs had always led to long periods of stability.

In order to build a Greater Europe from the Atlantic to the Pacific, which is just another perspective on the topic you have chosen today, it is imperative to comply with a number of prerequisites. First, it is imperative, not in words but in deeds, to start building an architecture of equal and indivisible security, as enshrined in the OSCE and the Russia-NATO Council decisions that I mentioned earlier. It is important to agree on strict compliance with international law, including the principles of national sovereignty and non-interference in internal affairs, and to refuse to support unconstitutional changes of government in other states.

President Putin has repeatedly reaffirmed our commitment to such agreements, and our willingness to provide extra confirmations regarding all our obligations arising from the UN Charter. He mentioned this in the course of the Sochi meeting of the Valdai Club, which I mentioned earlier. Our leader has on many occasions confirmed our readiness to create a common economic and humanitarian space from Lisbon to Vladivostok. We believe that all the necessary prerequisites are in place for us to be able to implement this strategic mission. This includes common civilisational and cultural roots, a high degree of complementarity of our economies, the commitment to single trade rules in line with the WTO norms, and our interest in finding innovative ways to promote growth.

In this regard, we focus particularly on the theme, the slogan, and the mission that can be described as the "integration of integrations", that is, the establishment of practical cooperation between the European Union and the Eurasian Economic Union. In October 2015, the corresponding document drafted by the EAEU was submitted to the European Commission with a proposal to use it as a basis for further discussions. We are still waiting for a meaningful response from our colleagues in Brussels.

Of course, the construction of the common European home will not succeed without the free movement of people (by the way, we all put our signatures in favour of this in the Helsinki Final Act), the protection of the rights of ethnic minorities, and the uncompromising fight against all forms and manifestations of racism, xenophobia, aggressive nationalism and chauvinism.

Today we must make active efforts to restore mutual trust in Europe that has been seriously undermined by the internal crisis in Ukraine. We all agree that a current priority is an early and full implementation of the Minsk Agreements, under which Kiev, as we know, took on concrete obligations to give a special status to Donbass and formalise it in the Ukrainian constitution, to adopt a law on amnesty and to hold local elections. I want to point out that these are the basic European standards, which stipulate that citizens have the right to local self-government and to an unimpeded use of their native language. Russia is interested in the settlement of this conflict on its border more than anyone else, even though you periodically hear allegations that we want to artificially drag out this conflict by keeping it hot or chilled forever. These are attempts to use improper means in a bid to shift the blame to someone else.

In conclusion, I would like to say a few words about Russian-German relations. We believe that the progressive growth of these relations meets the fundamental interests of our nations and is a major factor of European security and stability.

We want to maintain and increase the potential of positive interaction, which we have accumulated over many years, and we have consistently advocated the maintenance and further development of an equal dialogue based on mutual respect. We are ready to discuss any initiative and proposal and to deal with current issues constructively.

We know that people in Germany are coming to see – and we are convinced of this – that there is no alternative to normalising relations with Russia and to resuming full-scale cooperation in the formats that have proved to be successful. We regularly receive such signals from the German public, business community and individuals. We welcome this attitude wholeheartedly. I assure you that we only encourage these sentiments by publicly expressing our willingness to resume normal relations based on mutual respect.

We are pleased to see the broadening of interparliamentary, interagency and interregional ties and contacts between our people in the cultural, humanitarian, scientific, educational, historical and memorial areas. Following the 2015 cross-cultural years of Russian and German languages and literature, the Russian-German Youth Exchange Year was launched by Foreign Minister of Germany Frank-Walter Steinmeier and me in June this year. We are glad that the Petersburg Dialogue Russian-German Public Forum, an important platform for promoting citizen diplomacy, has reopened. It is gratifying that the attempts to change the focus of this format from positive relations to a mentor-student relationship have been wisely set aside. The forum has preserved its constructive spirit.

As I have said, the Potsdam Meetings are making a positive contribution to our common efforts. Considering the high intellectual value of your discussions, I hope that your focus on dialogue will help you find the best answers to the current challenges, which we are facing and which, as I understand, are not making anyone here happy.

Once again, have a constructive discussion.