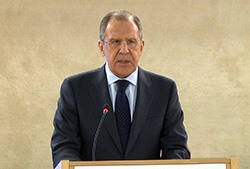 International relations are going through a difficult phase. New dangerous hotbeds of tensions are arising in addition to already existing long-standing conflicts. Risks of inter-religious and inter-civilisational rifts are high. All of this has a negative impact on the people, whose fundamental rights, including the right to life, are increasingly violated.

Along with promoting global peace, security and sustainable development, protecting human rights must remain an absolute priority of the UN. The way the international situation is unfolding confirms again that respect for human rights is impossible without taking due efforts to strengthen global and regional stability. Anyone can see the tragedy of millions of civilians, including women and children, unfolding across the vast expanses of the MENA that have been destabilised as a result of illegal actions to topple unwanted regimes and pander to extremists. The fate of the Christian population is of particular concern. We are grateful to all of our partners who supported our initiative to hold a high level meeting on protecting Christians, which will be held here today at the Palace of Nations.

Russia is at one with the peoples of the Middle East and North Africa in their aspiration for a better life, and supports the efforts of Arab leaders to eradicate the terrorist threat and implement reforms to promote national reconciliation and uphold the rights of all ethnic and religious groups. Promoting a settlement in the Middle East is one such task.

We call on the UN human rights protection mechanisms, including the UNHRC, to facilitate these processes by objectively and impartially considering violations of human rights and international humanitarian law in the region. It is important to avoid the politicisation of the human rights issues and especially their transformation into an instrument for increasing confrontation.

It is unacceptable to take advantage of the high principles of human rights protection to achieve political and economic goals, to "make a case" for interfering in the internal affairs of sovereign states, or to take unilateral coercive measures or even military activities leading to the suffering of ordinary people.

It is sacrilegious to use tragedies, such as the cowardly murder of Boris Nemtsov, to take on the role of investigative authorities or courts of justice and put forward openly politicised, unsubstantiated and provocative interpretations. This dirty crime will be investigated to the fullest extent of the law, and those responsible will be brought to justice. President Putin immediately issued the necessary orders, and this investigation is under special control.

Any concerns in the human rights field should be addressed solely through mutually respectful dialogue based on universal instruments that make up the modern human rights protection system.

The creation of this system, as well as the creation of the UN, was an important result of victory in World War II, the 70th anniversary of which the world will celebrate this year. We are all indebted to the victors, who fought for the ideals of the truth, justice and human values, and who laid down their lives for the sake of our future. Our sacred duty is to preserve the memory of their heroic feat and not to let the world forget the lessons of history or revise the results of World War II, which are enshrined in the UN Charter. Humankind must always remember the terrible consequences of the attempts to establish world domination, the belief in one’s own exceptionality, and the neglect of elementary rules of law and morality.

Unfortunately, much of the vaccine against the Nazi virus that was developed during the Nuremberg Tribunal has worn off. Today, many countries show an increase in their manifestations of neo-Nazism, aggressive nationalism, xenophobia, and religious intolerance.

At the same time, the awareness of the need for countering these challenges in a consistent and systematic manner is getting stronger: in December 2014, the UN General Assembly resolution on fighting the glorification of Nazism initiated by the Russian delegation and co-authored by 44 states from all over the world was adopted by a vast majority of votes.

Today, the situation in Ukraine is the cause of deep concern. An unconstitutional coup in the country one year ago led to a dramatic increase in the activities of ultra-radical forces, including ones that openly use Nazi slogans and call for ethnic cleansing. Numerous crimes committed against civilians during the Maidan protests, in Odessa, Mariupol and other Ukrainian cities remain uninvestigated. We are seeing an all-out attack on free speech, including attempts to introduce a ban on journalism in Ukraine. When the OSCE Representative on Freedom of the Media refers to measures to ban Russian media in Ukraine merely as "excessive", serious doubts arise as to the impartiality of this institution. All of this is taking place amid the campaign held by Western countries in the OSCE to protect the rights of journalists as a special category of citizens.

We call on the Ukrainian leaders to dissociate themselves from the "party of war" and other extremists and to take the course towards peace and harmony in a multi-ethnic Ukrainian society on generally acceptable terms.

The package of measures agreed to in Minsk on February 12 and approved by UN Security Council resolution opens a way to achieve this. It is imperative to ensure their full implementation, including constitutional reform, which will ensure the legitimate rights and interests of the citizens of eastern Ukraine.

Major progress has been achieved in implementing the package of measures that were approved in Minsk. The ceasefire is becoming consolidated, and heavy arms are withdrawn under OSCE supervision. Those who try to ignore this and demand an increase in the supply of weapons to Ukraine are assuming grave responsibility for thwarting the peace settlement. They are guided by anything but the interests of the Ukrainian people, or a concern for their lives.

The dire humanitarian situation in Donbass calls for our undivided attention. For the sake of upholding the basic rights of its citizens, the Ukrainian government should immediately lift the virtual blockade on the region that it introduced, restore economic ties, resume social payments, banking services, and the free movement of people between Donbass and other regions of the country. The relevant provisions are enshrined in the Minsk arrangements and their implementation should not be delayed. We strongly expect the UN human rights and humanitarian agencies operating in Ukraine, as well as the OSCE Mission and the ICRC, to seek a speedy resolution to these challenges.

In closing, I would like to emphasise the need to rid international cooperation in the field of human rights of messianism and attempts to approve any one system of values ​​as a certain "golden standard". We must respect the diversity of the modern world. There is no and there can never be any such thing as the "end of history". Humankind in all its cultural, religious and civilisational forms is an objective reality. There is no and there may be no other path for us, but to maintain an equal and mutually respectful dialogue, without illusory attempts to prove the exceptionality of particular views on human rights. If "unity in diversity" could be the motto of one state, why should the same principle be questioned in international affairs?

The world is polycentric in all its dimensions, including human rights. We believe that an approach based on promoting unity in diversity will make the HRC efficient.

I wish you success and thank you for your time.