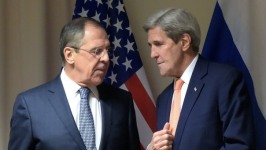 I understand how you feel at this late hour, and as John said, we are grateful for your patience. We are also grateful to each other for the patience shown by our respective delegations. We hope that all these efforts were not in vain.

We have completed a major effort that was launched under the direct instructions of our presidents back in February 2016. Since then, this effort has continued uninterrupted on the expert and ministerial level. As John has said, we maintained regular contact by telephone and in person.

As you may remember, one year ago Russia’s proposal to coordinate our actions met with quite a cool response from our US colleagues who were willing to engage in so-called deconfliction only, that is to develop a mechanism and procedures for avoiding unpredictable incidents. However, as I said, in February of 2016, the presidents had a conversation and came up with an initiative to engage in additional efforts primarily aimed at ensuring a sustainable cessation of hostilities. This laid the foundation for the series of meetings that followed, culminating in this meeting today.

The fact that this effort has taken us so long can be explained by a number of factors: difficulties on the ground, the perplexing complexity of the situation in Syria with the multitude of players involved both inside and outside Syria. Of course, the deep rooted lack of trust between the Russian and US partners on the Syrian issue, and not only on this issue, didn’t help. But there were other reasons as well. The lack of trust is still there, and so are those seeking to derail today’s agreement. The latest example, as we have discussed with John, was the absolutely arrogant announcement of sanctions on the eve of the meeting between our presidents in China. Additional sanctions were enacted after their meeting and ahead of ours. Nevertheless, we are not that quick to take offence. We articulate our position very clearly, assuming, unlike other parties, that the settlement of the Syrian crisis should not be a matter of speculation. We believe that this is a primary responsibility of the leading powers, primarily Russia and the US, who are trusted enough to become co-chairs of the ISSG. It is our responsibility alongside our other international partners in and beyond the region to do everything it takes to create an environment that will be conducive to a settlement of this grave conflict.

Despite all these issues and despite the mistrust that still manifests itself, and attempts to derail the agreement that we reached today, we have succeeded in working out a package of documents. In fact, we have agreed on not one, but five documents. This package is aimed at arranging the efficient coordination of counter-terrorism efforts, as well as expanding humanitarian access to people that are in need of assistance, primarily in Aleppo. In addition, it envisages the strengthening of the ceasefire. At the same time, it creates conditions for reviving the political process that has not made any progress for some time.

Humanitarian access is another case in point. In the document agreed to today we have set forth a procedure and mechanisms for delivering humanitarian aid, including commercial and civilian shipments in coordination with the UN and the Syrian Arab Red Crescent, primarily to Aleppo, its eastern and western parts.

We have also coordinated procedures for reacting to ceasefire violations, and they will come into force soon. As John said, D-Day is September 12, when the countdown will begin for a number of counter-terrorism actions, humanitarian aid delivery and the strengthening of the ceasefire regime.

John said that it is not the paper that is important but the implementation of the agreements that have been sealed on this document. Russia and the US have pledged to do everything in their power so that the concerned parties comply with these agreements. As I said, the Syrian government has been notified of these agreements and is willing to honour them. The Syrian government will support our agreements with the US. Therefore, we will do our best, although obviously not everything depends on us. Media leaks about the positions of some opponents from the groups that call themselves “high committees” mention ultimatums and categorical refusal to cooperate. We have received notes from the opposition groups that have dug themselves in Aleppo threatening our humanitarian convoys. I would like to remind you that the next humanitarian convoy was ready on August 26, when John and I met here last time. The UN and our Syrian colleagues were ready for it, but the opposition announced that any convoy on Castello Road would be shot at. They maintain this position regarding all our plans. Efforts must be taken to influence them. There have been many times in this process when obligations have not been fulfilled, with explanations offered about why this or that obligation could not be fulfilled.

As I said, today we have coordinated a large and very specific package of documents. We cannot make these documents public for the reasons John mentioned. They contain sensitive and serious information. We do not want this information in the hands of those who would try to disrupt the implementation of humanitarian access measures and other parts of our agreements. But these documents will enter into force officially on September 12, or on so-called D-Day.

I am glad that John said a very important thing. He said that the US has resolved to fight Jabhat al-Nusra and that those who think that fighting al-Nusra is a concession to Russia are wrong. This is a very important statement, because many people thought the US was not eager to fight al-Nusra but was actually protecting it for use in a so-called Plan B, which provides for overthrowing the Syrian government. This is why I wholeheartedly welcome the statement John made today.

This is not the end of the road; this is only the beginning of our new relationship. We hope that everyone who sincerely cares for peace and a multinational and multi-confessional Syrian state will support our agreement. We expect to maintain close ties with our friends at the UN – the UN Secretary-General’s Special Envoy for Syria Staffan de Mistura and his team – because we are convinced that the implementation of these agreements will create conditions, as I said, for the resumption of intra-Syrian talks on a political settlement. We are urging Staffan de Mistura and his team to use this opportunity.

Question (addressed to both officials): You talk about implementation as being the most important thing about this agreement. The entire ISSG, along with the Syrians and the opposition, agreed to a ceasefire in February. It was endorsed by the UN Security Council. How is this different? How can you make sure your respective allies in Syria and others who support them, including Saudi Arabia and Iran, are ready to respect the terms of any agreement that you adhere to?

Sergey Lavrov: No one can guarantee this 100 percent because there are too many parties to the puzzle. And the interests of some are diametrically opposite. It is a major achievement that we have created the ISSG through Russian-US efforts and that it includes all the countries that can influence the situation, including Saudi Arabia and Iran that you mentioned. It is another matter that we use the opportunities offered by the ISSG in a responsible manner, avoiding situations where the parties just show up for an emotional debate. Everything must be prepared carefully in advance. I believe that the ISSG should be informed about the documents we have approved today, and we should also brief the UN Security Council. I hope these bodies will support us. We don’t see any other solution other than an inclusive dialogue. This inclusiveness must also be extended to intra-Syrian talks and to the external forces that should be closely involved in these talks.

Question (addressed to John Kerry): For seven years, the Administration has attempted the same policy of increasing sanctions and strategic patience with North Korea. The Security Council, including Russia, passed what you called the most biting sanctions ever, and North Korea has only increased its weapons program and provocative behaviour. Why is it not time to try either a harder embargo or new negotiations on the terms North Korea is laying out?

Sergey Lavrov: I would like to use this occasion to say that we have approved a special statement on the Korean Peninsula to be clear that we do not accept any actions that violate UN Security Council resolutions. We see them as Pyongyang’s disregard for international law. We cannot allow a policy of undermining the non-proliferation regime, which threatens peace and security, to remain unanswered. On the other hand, you are right that the current situation shows that the diplomats need to be more creative instead of responding to aggravations with sanctions and more sanctions. I am convinced that, while denouncing these reckless actions by North Korea, we should refrain from measures that can further escalate tensions or push the region towards a military confrontation. This reminds me of the problem with Iran’s nuclear programme and Syria’s chemical disarmament, when all parties, including Russia and the US, acted creatively. I believe that, in addition to a big stick policy, we should use creative approaches to find solutions that can defuse tensions on the Korean Peninsula and in Northeast Asia as a whole. We’re working on this; we believe it’s premature to give up on the six-party talks. We must look for ways to resume them.

Question (addressed to John Kerry): I have a question about the launch of a political dialogue between the opposition and Damascus. Now that Russia and the US have come to an agreement on extremely difficult issues, will Washington fulfil its commitment to influence the opposition to resume negotiations?

Sergey Lavrov (speaking after John Kerry): Resuming the negotiations early is not an issue that depends on the US. It is a requirement of the UN Security Council. Under Resolution 2254, the talks must be inclusive and must involve all Syrian parties, including the groups that were created at the meetings in Moscow, Cairo, Riyadh and other places. The mandate of the UN Security Council is completely clear on this. The UN must honour this mandate by ensuring the inclusiveness of intra-Syrian talks, which we hope will resume in Geneva soon.

Some countries have attempted provocations, claiming that one of these groups is the only one representing the opposition that is ready to hold talks on Syria’s future. Attempts have been made to legalise this group by inviting it to the UN Secretariat. We are aware of these intentions. We believe that they run counter to everything that has been agreed to within the ISSG, which is co-chaired by Russia and the US, and also UN Security Council resolutions. The countries that sponsor various opposition groups should be fully aware of their responsibility to prevent these groups from hogging the blanket. These groups should not be thinking about their ambitions but about the Syrian people, their unity and the integrity of the Syrian state.