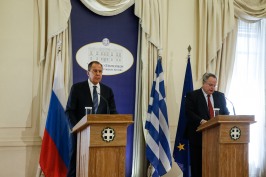 Talks with my colleague Nikos Kotzias were very specific. They took place in an atmosphere of friendship and mutual trust and respect for each other’s positions, which reflects the character of the extremely close ties between our countries and peoples that date back centuries.

To begin with, I’d like to thank our Greek friends for their hospitality and the very warm welcome that was accorded to my delegation and me.

We discussed the condition of bilateral relations, first of all in the context of the agreements reached during the visit of Russian President Vladimir Putin to Greece last May. We noted the vigorous development of political dialogue and contacts between relevant ministries and departments, including, of course, our foreign ministries. You have just attended the signing of the plan for foreign ministry consultations in 2017-2019. This alone shows that our planning covers a fairly long period and that we are not limited to immediate problems in international relations.

Our trade and economic agenda was very short because the Intergovernmental Commission on Economic, Industrial and Scientific-Technical Cooperation will hold its meetings here tomorrow and the day after tomorrow. Our delegations will discuss ways of overcoming negative trends that exist in our trade and economic ties for obvious reasons. We share the view that we have meaningful potential for promoting energy cooperation and will also hold specific talks on this issue with a view to practical results.

Greek Foreign Minister Nikos Kotzias mentioned the very impressive cross year programme that is being carried out under the patronage of President Putin and Prime Minister Alexis Tsipras.  It provides for over 170 events in the areas of culture, science, education, tourism, sports and trade and economic contacts. The way these events are conducted shows once again the mutual affection of our people and their mutual readiness to expand cooperation all along the line. I’m glad to say that the tourist flow from Russia to Greece increased by 20 per cent in the first half-year and set a record, if I’m correct. I’m sure that more and more Russians will choose to spend their vacations in wonderful Greece.

As regards international issues, we discussed the current state of relations between Russia and the EU, Russia and NATO. We highly praise the attitude of Greece. It is one of those countries that reject the line towards confrontation as a matter of principle and advocate dialogue on the most complicated issues with a view to finding universally acceptable solutions.

We touched on the Ukrainian crisis. We share the view that the Minsk agreements must be fulfilled. This process has been dragged out already. However, the recent meeting of the leaders of the Normandy Four in Berlin gives us grounds to hope for the invigoration of the efforts to fully comply with the Minsk agreements in the order they envisage.

We also reviewed issues linked with the crises in the Middle East and North Africa. Developments in Syria, Lebanon, Yemen and Iraq do not leave much hope for optimism. We adhere to a common line in all cases – the need to fulfil UN Security Council resolutions be it in Syria, Yemen or Libya. The UN also has important, useful things to add on Iraq.

Naturally, we discussed the developments around the Cyprus settlement. In this regard, it is necessary to fulfil UN resolutions just as in all other crises. They outline the contours of a settlement that will be stable and acceptable both for Turkish and Greek Cypriots.

We also touched on the general security and stability in South-Eastern Europe and the tasks of promoting cooperation between Balkan countries. As Mr Kodzias has already mentioned, the current programme of our stay here is packed with events linked with civil society cooperation. We have just been to the Russian-Greek Civil Society Forum, and visited together the Byzantine Museum in Athens where an exhibition from the collection of the State Hermitage Museum was opened.

In general, the histories of Russia and Greece are closely intertwined. Descendants from ancient Hellas founded many cities in the south of Russia, for instance Novorosiysk and Gelendzhik. The Russian presence on Mount Athos is virtually a thousand years old. Having found themselves in the other country, ethnic Russians and Greeks felt at home and acquired a new homeland. One of the brightest examples is Ioannis Kapodistrias, whole role in the history of Russia and Greece is difficult to exaggerate.

Two symbolic events took place last July. A monument to the Greek legion of Emperor Nicholas I was unveiled in Sevastopol to commemorate the feat of Greek military leaders that took part in the defence of Sevastopol during the 1853-1856 Crimean war. Commemorative events in honour of Russian Admiral Illarion Filosofov were also held in July but this time in Greece, on Kythira Island. He left Russia after the October revolution and played a big role in defending the island during the German occupation in the years of World War II.

Our ministry has repeatedly given our Greek friends copies of documents related to the history of your country. I’d like to continue this good tradition today. We have prepared for the transfer to the Greek side a copy of Catherine the Great’s 1788 address to the religious and secular leaders of Greece in which the Empress urged them to struggle against the oppressors of the freedom and faith of the Greek people. This manifesto was issued and widely disseminated in Greece during the Russian-Turkish war. It produced a large public reaction. The second document is a letter of Greek military leaders to Russian Emperor Nicholas I dated December 1826 with a request to support the struggle of the Greek people and help them gain independence. I hope these documents will evoke much interest not only among the professionals but also the public at large and that our cooperation in this area will continue just as in all others.

I’ll now present the copies to the Foreign Minister of the Hellenic Republic, Nikos Kotzias, and I thank you for your attention.

Question: Can you comment on the statements that have been made in the past few weeks expressing doubts on the Lausanne agreements? What is your position on the status of Cyprus and Russia’s role in resolving this issue?

Sergey Lavrov: The answer to the first question is very simple. Under any circumstances it is necessary to respect international law and commitments stipulated by it and international legal documents.

Today we discussed the Cypriot settlement in detail. As I’ve already said in my opening remarks, it is essential to respect international law, embodied, in this case, in the UN Security Council resolutions on the Cypriot settlement. They emphasise the need to find agreements acceptable both to Greek and Turkish Cypriots. These are agreements on the key issues that are now being discussed, such as sovereignty, security guarantees and property. One must not leave this framework.

Since you asked me about the role of the UN Security Council, I will note that it coordinated the aforementioned foundations of the settlement. Moreover, by tradition, the UN Secretary-General’s envoy on the Cypriot settlement and the five permanent members of the UN Security Council took an active part in supporting the talks. This has always guaranteed that the negotiating process will be aimed at finding mutually acceptable positions and producing mutually acceptable results. I hope that this logic will prevail this time as well. Sometimes we hear proposals that contain some artificial deadlines by which everything must be resolved, or suggestions on dictating specific parameters of the Cypriot settlement from the outside. We do not support such proposals. As I see it, we have identical positions with our Greek colleagues on this.

Question: Recently the US Defence Department announced that a military operation may take place in Raqqa in the near future. How does this correspond with the positions of Russia and Syria? Did the US invite Russia to take part in this operation? If so, what will your response be?

How will the change of the US Administration in the coming days affect the Syrian settlement?

Sergey Lavrov: It is futile to try to answer the last question. Let’s leave speculations aside and determine our position on the basis of real facts that will soon become public knowledge. We will know who won the election in the United States and what position will take shape on Syria and all other pressing international issues.

At one time, when we still had good prospects for coordinating efforts with the US in combating terrorists and strengthening the ceasefire regime for those who disassociated themselves from terrorists, Raqqa was also mentioned as a potential target of our joint actions. Later on, the Americans did not raise this issue. Yes, they are planning (at any rate, this was announced) an offensive on this Syrian ISIS capital. But today, if I’m correct, I saw a report somewhere that said they have changed their plans and have delayed the offensive for an indefinite time. This is all I know.

I will add that we still have channels of communication on the Syrian issue, including East Aleppo. I hope we will achieve some results and that our American partners will not withdraw their consent, as they have already done with the September 9 agreements.

Question: Can you comment on the apprehensions concerning Russian-US relations? In a recent interview you said that these unsound relations due to the developments in Ukraine have led to a vacuum of trust between Moscow and Washington.

Sergey Lavrov: I don’t remember saying that the crisis in Ukraine revealed problems in our relations. Problems were piling up for a long time, long before the start of the events in Ukraine which triggered the unconstitutional coup d’etat backed by the US, the EU and NATO.

Problems emerged when the US suddenly realised that we do not snap a salute each time we discuss some international problem with them. They saw that Russian President Vladimir Putin is restoring the independence of our foreign policy, strictly in line with international law. However, this is an independent course that implies consideration of one’s partners’ interests in international talks. It does not mean one has to follow a leader who is absolutely convinced in his exceptionalism.

President Putin said the other day that the United States is a great power, but this does not mean that all others should play by rules invented by Washington. If you remember, two or three months ago President Barack Obama said exactly this: rules in the world must be established by the US. An arrogant but probably an honest statement. If our American partners think like this, apparently they will have to go through some periods of the fairly painful realisation that nobody will be able to do anything single-handedly in this world, and that for this reason it will be necessary to come to terms in any event. The sooner this happens, the better.