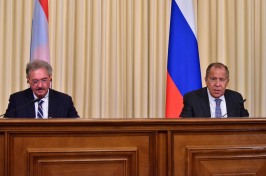 Luxembourg is our long-standing partner. This year we are marking the 125th anniversary of the establishment of diplomatic relations between the Russian Empire and the Grand Duchy of Luxembourg.

The ties between our countries are diverse and multifaceted. Luxembourg is one of the largest investors in Russia. Interparliamentary ties, interregional exchanges and contacts in science, education and culture are steadily developing.

We have an intensive political dialogue. Today we discussed ways of intensifying it further. We welcome the strong interest within business circles in expanding our cooperation. Luxembourg industry majors are active on the Russian market, including SES Global in the space industry, Paul Wurth in the metallurgical sector and Guardian Industries, a high-tech glass manufacturer. Russian and Luxembourg railway companies are developing a joint project for a multifunctional logistics transit hub as part of the Eurasian Silk Road international project. Promising areas for our efforts include a project, in conjunction with Le Freeport Luxembourg, to create Freeport Vladivostok, a special economic zone in the Primorye Territory, which was discussed just a few days ago by Russian representatives and their foreign partners at the second Eastern Economic Forum in Vladivostok.

We noted that our trade has of course been affected by the current state of relations between Russia and the European Union and by the global market situation. Last year, trade declined by 25.9 per cent. However, this year, in the first six months, the trend reversed and trade has already grown by over 9 per cent. We hope that the decisions adopted at the February meeting of the Joint Commission for Economic Cooperation between Russia and the Belgium-Luxembourg Economic Union will help consolidate this trend.

We exchanged opinions on the relationship between Russia and the EU and addressed the most acute and topical conflict situations, primarily the situation in Ukraine and the Middle East and North Africa.

With regard to Ukraine, we are convinced of the need to restart the implementation of the deadlocked Minsk Agreements. To this end, Kiev and the Donetsk and Lugansk people’s republics should meet each other halfway and meet the obligations they assumed a year and a half ago. We are urging our Ukrainian colleagues to fulfill their obligations to carry out a constitutional reform so as to enshrine in law the special status for Donbass on a permanent basis, grant an amnesty and organise local elections in the DPR and LPR. All of this needs to be done through direct dialogue with Donetsk and Lugansk within the framework of the Contact Group, something that Kiev has been recently trying to shirk. We briefed Mr Asselborn and his delegation on the efforts within the framework of the Normandy format, where Russian, German and French representatives together with Ukrainian representatives are trying to ensure the fulfillment of the aforementioned obligations on political reforms in Ukraine. We believe that Kiev’s policy of first ensuring that the regime of quiet takes hold and only then beginning to address political aspects of the Minsk Agreements is aimed at dragging out the process indefinitely. In response, we propose working out a parallel roadmap within the framework of which every step to strengthen the security regime would be accompanied by a step to advance political reforms, above all in the form of the bills that Kiev undertook to draft and adopt.

We discussed the Middle East and North Africa, primarily in light of the situation that is evolving amid the strengthening positions of terrorist groups and the need to relentlessly fight ISIS, Jabhat al-Nusra and all those hiding under their “umbrellas.” We noted that the package of documents, coordinated by Russia and the United States, which was adopted on September 9 in Geneva and came into force yesterday, should help advance toward a political settlement of the Syria crisis in the context of fulfilling antiterrorist tasks, improving the humanitarian situation and strengthening the cessation of hostilities regime with parties to the ceasefire, which definitely does not include terrorists. All of this should create prerequisites for the resumption of the intra-Syrian political process, which simply cannot be delayed any longer. We made this known in Geneva to Staffan de Mistura, the UN Secretary General’s Special Envoy for Syria.

We had a very intensive, productive conversation. We are grateful to our colleagues for this dialogue. We will continue to maintain contacts on these and other issues on the international agenda.

Question (to both ministers): What are the prospects for holding direct Palestinian-Israeli negotiations? Have the time and place of a possible meeting between Mahmoud Abbas and Benjamin Netanyahu been specified? Will it be held in Moscow or Luxembourg, which Israel recently mentioned?

In an interview with the German newspaper Die Welt, Luxembourg Foreign Minister Jean Asselborn said that Hungary has no place in the EU. Are there other countries that have no place in the European Union? Do such statements help keep the EU united at a time of great turbulence in European society? What’s your take on the prospects of keeping the European Union united given the current challenges?

Sergey Lavrov: Unlike some other participants in international affairs, we do not interfere in the internal affairs of individual countries or organisations. Our interests lie in having the most stable, reliable and predictable partners possible. This, perhaps, is our main criterion.

Regarding the possibility of holding direct Israeli-Palestinian talks, as you may recall, in one of his speeches, Egyptian President Abdel Fattah el-Sisi spoke in favour of a direct meeting between Israeli Prime Minister Benjamin Netanyahu and President of the State of Palestine Mahmoud Abbas in Russia. We are ready to act as hosts. The meeting place, be it Moscow, another part of Russia, or a third country, should be determined by the leaders of Israel and Palestine. With respect to time, we, too, will be guided by their willingness to establish such contact. Whatever the timing, when everything comes together, and the leaders of Israel and the Palestine are ready, and if the choice falls on Russia, we will do everything we can to make this meeting a success.

Question: As of this moment, the breaking news is that the Israeli Air Force attacked Syrian forces in southern Syria. Can you comment on this? How might these strikes affect the course of the Syria peace talks?

In Geneva, did Moscow manage to convince Washington of the need to expand the list of terrorist groups in Syria and include those whom Washington has until recently considered the opposition? If so, what groups? Based on the recent agreements with US Secretary of State John Kerry, what’s your take on the chances to draw a line between the opposition and terrorists in Syria?

Sergey Lavrov: I believe you are referring to the Golan Heights. If so, (because I haven’t heard news about any other bombings), then, of course, the Golan Heights situation reflects the overall destabilisation of the Middle East and a sharp increase in the terrorist threat there, which, of course, must be countered. The Golan Heights harbour terrorists recognised by all as enemies of humanity. Of course, fighting them, including air strikes, should be done in accordance with UN Security Council resolutions on the Golan Heights. In general, it is imperative to exercise restraint and avoid provocations. This is the premise that we proceed from in all our contacts with the Israelis, Syrians, and other countries in the region.

With regard to Syria, I’m faced with a more important task, which is to make sure all those on the list of terrorist groups remain on that list. There is too much evidence that the former Jabhat al-Nusra, which is now called Jabhat Fateh al-Sham, is seen by many participants in the processes unfolding in the Middle East and North Africa as a force to be kept for later use in toppling the Syrian government. I put this question bluntly to Secretary Kerry. He categorically denies that the United States has plans to "protect" Jabhat al-Nusra or to keep it off the target list of the US-led coalition’s air strikes. I reiterate, this is what US Secretary of State John Kerry told me. I have no reason not to trust him or his sincerity when he says that Jabhat al-Nusra will remain on the list of terrorist organisations.

Howeve, there is evidence that not everyone thinks or believes so. There is, for example, Ahrar al-Sham. In the early days of the ISSG, we proposed including it, along with ISIS and Jabhat al-Nusra, on the list of terrorist organisations.  Back then, our partners refused to do so. In order not to delay the entry into force of the UN Security Council resolution, we agreed to leave only ISIS and Jabhat al-Nusra on the terrorist list. Now, one of the leaders of Ahrar al-Sham, speaking in an interview with, I believe, the Saudi media, commented on the Russian-US agreement of September 9, saying that the main obstacle to implementing this agreement is continuing to designate Jabhat al-Nusra as a terrorist organisation that is not covered by the cessation of hostilities agreement. He further stated that Jabhat al-Nusra has allegedly broke with Al-Qaeda and is working to realise the aims of the Syrian revolution alongside other moderate groups, participating in joint operations against the regime. I read such statements in the British media which, commenting on Russian-US agreement of September 9, also claims that the problem with its implementation will lie with the fact that Jabhat al-Nusra was unjustly left on the list as a terrorist organisation. This is a topic for serious discussions with our American partners. I have already said that I have no reason not to believe what Secretary Kerry said, but we see what’s happening on the ground in Syria: the coalition is very reluctant to bomb the positions of Jabhat al-Nusra. Therefore, those in Washington who are in charge of the military aspect of these processes, probably, could provide some information.

There’s another point I’d like to mention. Speaking about the agreement of September 9, which Russia and the United States concluded in Geneva, we hear Washington claiming that the United States does not believe that Russia will comply with the terms of the agreements as they are written. In particular, such a statement was made by the White House spokesman Josh Earnest. A strange statement, given that the agreement includes the US commitment, which it confirmed several times, to separate terrorists from moderate opposition. The United States undertook this commitment in early 2016. It will soon be 12 months since that happened, but nothing has been done. Moreover, as I have just cited, there are voices claiming that there’s no need to separate the moderate opposition from Jabhat al-Nusra, but legitimise the latter, maybe even reinforce it with new rebel groups in order to create a more effective military ground force to counter the Syrian army. All this requires a candid dialogue.

To avoid any doubt as to how we will execute the agreement as signed, we suggested publishing it rather than keeping it secret as our American partners wanted. We have nothing to hide. Everything that is written there has been agreed upon. We have pledged to fulfill all its provisions in good faith and to encourage everyone on whom the fulfillment of various sections of this document depends  to do the same and be honest and open about its implementation. We will seek to have this document published. I think that international public opinion, including the media, wants this. We suggest approving this document as is by UN Security Council resolution.