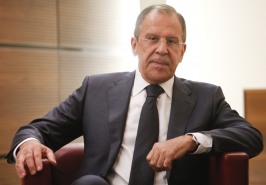 Question: In your opinion, will Donald Trump’s election as President of the United States turn a new page in the dialogue between Moscow and Washington? What kind of relations does Russia want to build with the US? Did Moscow help Donald Trump become president, as representatives of the Democratic Party allege?

Sergey Lavrov: If you allow me, I would like to begin with the last part of your question. Those who “helped” Donald Trump become president were the US citizens who voted for him on November 8. As President Vladimir Putin has said on a number of occasions, Russia has never sought to influence the election campaign, believing it to be an internal affair for the US. If anybody tried to interfere with the elections, it was the allies of the US. Just read what many European leaders said and wrote about Donald Trump during the campaign.

As for far-fetched stories about “Russian hackers” and other accusations against us related to the election, I am sick and tired of them. It is quite revealing that those who made insinuations of this kind and contributed to whipping up anti-Russian hysteria in the US in the run-up to the election have now sewed up their mouths. No evidence of interference in the electoral process was ever produced in the US or to the international community. This proves, yet again, that this whole story is more of a myth designed to serve momentary political objectives, rather than something real.

Russia hopes that the next US administration will refrain from repeating the mistakes of its predecessors who intentionally caused Russia-US relations to collapse. Of course, we view positively Donald Trump’s willingness stated in the course of the election campaign to promote cooperation between our countries. Russia, in turn, is always open to building an honest pragmatic dialogue with Washington on all matters of the bilateral and global agenda based on the principles of mutual trust, equality, taking into account each other’s interests and non-interference in internal affairs.

On November 14, 2016, President Vladimir Putin and US President-elect Donald Trump had their first telephone conversation, during which they confirmed their readiness to work together in order to overcome the current crisis in bilateral relations and resolve urgent international issues, including combatting international terrorism. The President-elect is about to appoint a new foreign policy team, and we hope that this team will make practical steps in this direction so that we will be able to establish constructive ties.

Of course, we are aware of the fact that fully restoring Russia-US cooperation is a challenging thing to do. Overcoming the destructive consequences of the anti-Russia policy implemented by Barack Obama’s administration will require serious efforts on both sides. However, as President Vladimir Putin has said, we are ready to do our part of the job in order to put Russia-US relations back on track.

We believe our two countries have a role to play on many issues in today’s world, including maintaining strategic stability and security and finding efficient solutions to the key challenges.

There are also opportunities for promoting mutually beneficial cooperation in trade, investment, innovation and technology. We are interested in expanding cultural and educational exchanges and facilitating people-to-people contacts. Overall, there are many things we can do, but only if there is a shared desire to move in this direction.

Question: What are Russia’s objectives in Syria?

Sergey Lavrov: Since the outbreak of the Syria crisis, Russia has always advocated for its political and diplomatic resolution  –  by launching an inclusive intra-Syrian dialogue. All of our actions are strictly in line with international law.

In the course of the operation by the Russian Aerospace Forces in Syria, which is being conducted at the official request of the UN member state’s legitimate authorities, we have inflicted serious damage on terrorists who have struck deep root in the country, among other things, due to massive support from the outside. At the same time, we have always believed that military methods alone cannot untie the Syrian knot. Our main objective is to give the Syrians a sense of perspective, hope for a better future in a free secular state where all ethnic and religious groups live in peace and accord.

The attempts to impose an alien agenda on the Syrians have already led to hundreds of thousands of dead and injured and millions of refugees and internally displaced people, have thrown the country years back, destroyed socio-economic infrastructure and introduced elements of ethnic-confessional divide into Syrian society. To resolve all these problems, the Syrians themselves, without any outside interference, should agree on what their state should be like, including its political and administrative organisation, and then determine who will run the country in a democratic way.

However, first of all, it is necessary to ensure peace and security and eliminate the terrorist hotbed in Syria. Meanwhile, entire districts remain in the hands of terrorist groups, such as ISIS and Jabhat Fateh al-Sham. In this connection, there is a pressing need for a broad antiterrorist front on a generally recognised international-legal basis. A corresponding initiative was put forward by President Putin back in September 2015.

At the same time, an inclusive intra-Syrian negotiating process should be launched, based on the provisions of the June 30, 2012 Geneva Communique, UN Security Council Resolution 2254, and decisions of the International Syria Support Group. The resolution of this task should be more actively facilitated by Staffan de Mistura, the UN Secretary-General’s Special Envoy for Syria, who has a clear-cut UN Security Council mandate.

We are helping create favourable conditions for that, supporting the process of “local ceasefires” and working closely with the armed opposition through the Reconciliation Centre in Hmeimim.

To reiterate, the Syria conflict can only be settled by the Syrians themselves. In this connection, we again urge our Western and regional partners to abandon attempts at geopolitical engineering in the region, respect Syria’s sovereignty and territorial integrity and work together to achieve the main objective: restoring peace in this state.