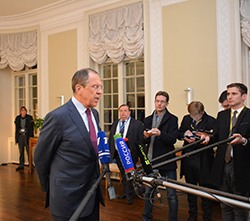 This was a long and productive meeting, where we discussed the progress made with executing the Minsk agreements. Although there were a lot of contradictory ideas, we eventually managed to reaffirm the pure principles agreed between the Normandy Four leaders in Minsk on February 12.

The foreign ministers of Russia, France, Germany and Ukraine have reaffirmed their commitment to the Minsk agreements and agreed on the need for a complete ceasefire and pullout of heavy weapons. We also supported the proposal initiated by the OSCE special monitoring mission and the Russian-Ukrainian Joint Centre for Control and Coordination on the withdrawal of tanks and small artillery (under 100 mm in calibre) from the Ukrainian ceasefire line, in addition to the types of weapons covered by the Minsk agreements. This is a very specific task. Russia backed this proposal six weeks ago through its representatives in the coordination and control centre, and I think that the Normandy Four supporting it is a huge achievement.

We also emphasised that the Minsk agreements should be observed in full, including their military, political, economic and humanitarian components. The continuing economic isolation of Donbass is wrong and damaging, and retirement and social benefits are not being paid, which is one of the issues underlined in the statement German Foreign Minister Frank-Walter Steinmeier is to make later today on behalf of the Normandy Four ministers.

We also had a thorough discussion of the steps needed to fulfil our leaders’ agreements that the Contact Group, representing Kiev, Lugansk, Donetsk, Russia and OSCE, should set up taskforces on various peace process components including military issues and security; the economic recovery of Donbass; humanitarian issues; and political and constitutional reforms. In fact we spent more time on this discussion than on anything else during the meeting.

We urged the Contact Group – which, as I said, includes representatives of Russia, OSCE, Kiev, Lugansk and Donetsk – to establish four taskforces as soon as possible, which should begin operation immediately. We realise that this is going to take some time, but I am greatly reassured by our shared resolution to make every effort to translate into life all the agreements made by our leaders. We will see tangible results soon, I think.

We certainly called attention to the latest developments in Ukraine and the legislation adopted by the Verkhovna Rada – the bills outlawing communist symbols and glorifying Nazism. We will continue pointing out these issues to our partners. I hope they realise that these moves by the Ukrainian Parliament are ruinous for the peace process. So far we have not heard any reassurances from our German or French partners that the European Union is going to make any moves in response. Nevertheless, I think they all understand that further attempts to glorify Nazism and downgrade the real WWII and the Great Patriotic War heroes can jeopardise the Minsk process.

The final statement to be delivered by Mr Steinmeier on behalf of the Normandy Four group gives us hope that the necessary conclusions will be drawn and the agreements reached by the Presidents of Russia, Ukraine and France and the German Chancellor will be eventually executed, even if not as smoothly as we would have liked.

Question: Even as this meeting began, fighting broke out around Donetsk. How would you assess the situation in Ukraine? How closely do you think the Berlin agreements will be observed?

Sergey Lavrov: We have met with the OSCE representatives today. Heidi Tagliavini, the Special Representative of the OSCE Chairperson, and Ertugrul Apakan, Chief Monitor of the OSCE Special Monitoring Mission to Ukraine, who were here, gave us an unbiased picture of what is going on. Unfortunately, there have been violations on both sides. They are reflected in the daily reports by the OSCE mission. The statement adopted today urges the conflicting sides to halt any incidents and withdraw all heavy weapons in accordance with the previously approved schedule. This is our firm stance, and we appreciate our partners’ commitment to share it.

Question: Has anyone tried to discuss Ukraine’s initiative to send in a UN peacekeeping contingent?

Sergey Lavrov: Our Ukrainian counterpart Pavel Klimkin did mention it, but the idea did not take on, and other ministers made no comments on it.