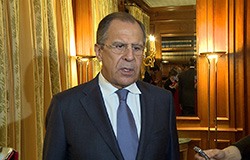 Foreign Minister Sergey Lavrov’s comment for the media on talks between the P5+1 international mediators and Iran, Lausanne, March 31, 2015

One more very important day of the ministerial negotiations on Iran’s nuclear programme is over. We can say with a large degree of confidence that framework agreements have been reached on all the key aspects of this issue at the ministerial level, and we hope that these agreements will be put on paper in the next few hours or a day at the most. A corresponding instruction has been issued to the experts. The agreement stipulates a comprehensive approach to settling this issue, including IAEA verification of the exclusively peaceful nature of Iran’s nuclear programme and detailed provisions on lifting the sanctions.

I’d like to say that the concept underlying this work is based on the initiative that President Vladimir Putin advanced several years ago, when he called for resolving Iran’s nuclear issue by recognising Iran’s unquestionable right to peaceful nuclear research, including uranium enrichment, provided its programme was reliably monitored by the IAEA and the anti-Iranian sanctions were lifted. Russia contributed to international efforts at the earlier stages by proposing the principle of superposition and reciprocity for the settlement of various aspects of this issue, which is one of the most difficult international issues.

These agreements must be now put on paper. I hope that when this happens, they will be made public without delay by Federica Mogherini, the High Representative of the European Union for Foreign Affairs and Security Policy, and the Foreign Minister of the Islamic Republic of Iran, Javad Zarif.

Our work is not finished yet, but the completion of this stage will mean that we have honoured the commitments we assumed in November to elaborate a political framework for addressing all the key aspects of this issue. As we agreed last November, the experts will be working on the technical details until the end of June, which will take a lot of effort because the devil is in the details, as you know. A complex issue like nuclear research calls for the utmost attention and accuracy. I believe that the result, which we hope to reach soon, looks attainable and will create the basis for resolving all the other issues pertaining to Iran’s nuclear programme.