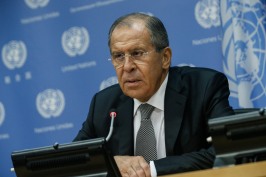 Question: You spent four or five days of intensive discussions with Mr Kerry and ISSG. Can you tell us about any progress you have achieved? Is this the end of diplomacy regarding the Agreement on the Cessation of Hostilities? What do you have to say to the Syrian people today?

Sergey Lavrov: Everything which we said is already in the resolutions of the Security Council, in the decisions of the International Syria Support Group, and in the Russian-American documents which have eventually been made public, because our American friends were shying away from doing so for reasons I don’t understand. Basically, this approach - as consolidated in the Resolutions of the Security Council - provides for movement on several tracks: fighting terrorism, making sure that there is a ceasefire between the government and the moderate opposition, except Nusra and ISIS, ensuring humanitarian access, and launching immediately the political process, which must be inclusive, involving all Syrian parties without any preconditions. The Security Council and the Russian-American Agreement also provided for a separation of those opposition groups who would like to be part of the cessation of hostilities from Nusra, and this was demanded, I think in January for the first time, or in December. And this goal has been reiterated repeatedly. Unfortunately, the coalition, led by the United States, which committed itself to make sure that this separation happens, has not been able to do this, though my good friend and colleague John Kerry every time we meet reaffirms that this is the commitment of the United States. We understand that this is a difficult task but everything is difficult in Syria, and to say that you can close your eyes on the fact that Nusra is covering its positions with some moderate groups and therefore you should not touch Nusra is not what we agreed.

The second topic which is very important and crucial is the political process. We cannot just close our eyes when one group of the Syrian representatives sabotages the decisions of the Security Council, which clearly stated the process should be launched without any preconditions. I don’t envy Staffan de Mistura and his team, we sympathise with them, but I believe they should be more guided by the Security Council resolutions rather than by caprices of some of the participants of negotiations, especially since this very group says that they would not participate in the negotiations if there is no pre-decision on the fate of President Assad. This is again a flagrant violation of the Security Council’s resolutions. So we are all in favour of the ceasefire, but without separating the opposition from Nusra, the ceasefire is meaningless. During the period since September 12, when the Russian-American document was formally enforced, there were almost 350 attacks of the opposition in Aleppo alone against the government and some residential quarters. Many people were killed, including Syrian military and civilians, and this is not the way the cessation of hostilities should be maintained. But when the Syrian government responded to these attacks, we were told that this is undermining the credibility of the entire exercise and therefore, they must not respond and sit idle for seven days, and then maybe the opposition would be kind enough to agree that the cessation of hostilities should be maintained by the opposition as well.

So we have to understand one very simple thing: all the components of the package approved by the Security Council must be addressed with the same vigour. And we cannot tolerate a situation when the humanitarian aspects are being abused and speculated upon. I want to be mistaken but it seems that some people want to spare Nusra and to keep it for a later stage when the notorious Plan B might be announced.

Question: Mr Foreign Minister, at the ISSG meeting yesterday, there was a demand for a seven days truce and we understand you offered three days, and today you had a meeting with John Kerry, the Secretary of State. Was there a compromise found out between the two of you, and what good is seven days or three days if you stated that the humanitarian conditions cannot be improved without rooting out the terrorist group first?

Sergey Lavrov: Well, if you want to go into these details, I have to say a couple of words which I normally would prefer not to say. Originally, our American colleagues said, I think on Wednesday, why can we not consider at least a three-day period, at least a three-day period. We checked with the military who know the situation on the ground and we accepted it the next morning. They said, ‘Thank you very much but we now need seven.’ I don’t think this is the appropriate way to conduct negotiations. I am convinced that these kinds of things – how long you can announce a pilot truce period for and what would be the guarantee that it won't be violated – all these things must be discussed by professional military people. And we did create a Geneva centre with the United States – and the people there, at least the Russian military representatives, are ready to sit down and develop a common map of this location of Nusra, so that there is no ambiguity and there is no outcry every time Nusra is hit and people start complaining that you hit somebody else. This is the key to the problem. Otherwise, as I said, as soon as we separate we can have a truce forever - for those who are not part of Nusra.