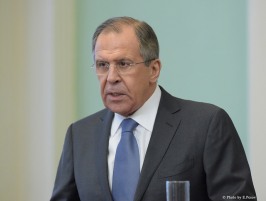 Question: Concerning the so-called “black list” which was apparently compiled in response to Western sanctions quite a while ago but was announced quite recently. Why was it not published earlier? What criteria did the Russian side apply when making up the list? It seems like it is the criteria that cause questions. Does a US “black list” exist, similar to the EU one?

Sergey Lavrov: It is useful to address this topic as it highlights many aspects of our relations with our Western partners. As far as I understand, we are being accused of having composed the list of persons who cannot enter the Russian Federation arbitrarily and without any reasons to do so, while the EU has fulfilled all formalities because every single Russian citizen included on the EU stop-list had “deserved” it.

It seems embarrassing to try to explain the absurdity and awkwardness of this logic, as it is an attempt to substitute international law with personal political considerations. Speakers and members of the Russian Parliament, in particular, are being accused of decisions they make, voting “in camera” on issues of utmost importance for the Russian Federation, including those related to the position on the popular vote in the Republic of Crimea and the city of Sevastopol. I do not know any precedent in history when parliamentarians were punished in such a way for their political position. That is why sanctions adopted by the EU, US and some other of your allies are absolutely illegitimate.

As for this story, we did not want to make it public, but naturally, we could not violate the major principle of international relations – the principle of reciprocity. When the EU introduced its restrictions against some 150 Russian citizens, we did the same, but with significantly fewer citizens of EU Member States being affected, as we did not want to follow EU’s bad example and initiate a noisy campaign by announcing names, as was done by Brussels. We simply informed our EU partners that Russia also had a sanctions list but we would not disclose it and send it to Brussels in order not to fuel scandal. We asked the European Commission to inform members of parliaments, politicians and public figures from EU Member States planning to visit Russia that they should first inquire at a Russian consulate in the respective country whether they would be able to use the transport documents they have (diplomatic passports, open visas). That was it, actually.

I do not know how faithfully the European Commission followed our request but it did not voice any objections to this arrangement – which dates back almost a year ago. Only when there was a case with a member of the German Bundestag, the European Commission suddenly recalled that arrangement and said that it remembered Russia’s warning but that apparently not everybody could use this opportunity properly. So why would not Russia forward the list to the EU in a confidential way and exclusively for its information, so that Brussels could inform the individuals listed? Following the request of the European Union, we forwarded the list on a confidential basis and it was immediately leaked to the press, while the EU, who allegedly does not comment on any leaks, was happy to give its comments. I can see disrespect for certain moral principles in this.

Finally, let me comment on allegations that the EU introduced its sanctions based on some law, while Russia did this absolutely illegitimately. Please, note and forward to your audience that we were reacting in a reciprocal manner to unilateral, unfriendly and unprovoked step. We did it after a lengthy period of self-restraint. We did not react to the fact that the EU had fully given up on all provisions of the Agreement of 21 February 2014 signed by foreign ministers of three respected European countries, which provided for the creation of a national unity government in Ukraine representing the interests of all Ukrainian citizens, including Russians and Russian-speakers. This Agreement was trampled on the very next morning. No one from the European Union, including ministers who had countersigned the Agreement, said a word in its defence. Thus the way was cleared for a coup d’état in which ultranationalists, including those who used and are still using Nazi symbols, were the driving force. When these people, having come to power by overthrowing legitimate authorities, announced that they were now governing Ukraine and started adopting laws representing a direct attack on the Russian language; when leaders who had orchestrated the putsch started saying that Russians should be forced out of Crimea because Russians would never glorify Stepan Bandera, the European Union kept silent. We did not react to such actions of the European Union which pointed directly to its inability or unwillingness to raise its voice in defence of Russians in Ukraine.

The responsive sanctions affected those who had most actively supported the coup d’état following which Russians in Ukraine started being harassed and discriminated. This is being done, by the way, in violation of numerous conventions Ukraine is part to, which demand protection of rights of national minorities and groups. It is probably because Ukraine wants to legitimise such policy that it has recently officially refused to apply the relevant conventions in Donbass. Again, we did not hear a word from the European Commission. But let me assure you: having responded proportionately and in a more confined manner than EU’s unilateral sanctions, we do not intend to be the first to spin this spiral. Everything depends on our partners, on their understanding of the situation and their ability not to hide the truth and not to pretend having no idea of what is going on.