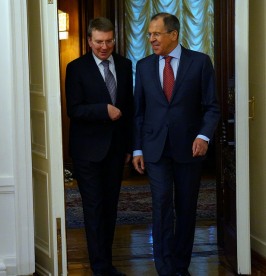 The meeting, which took place in a businesslike atmosphere, focused on the agenda of bilateral relations in light of Latvia’s presidency of the Council of the European Union in the first half of 2015. The two sides also exchanged opinions about the situation in Ukraine and on other current international challenges.

There was an in-depth discussion about the prospects for the development of bilateral ties and the task of improving the bilateral legal base.

The Russian side drew attention to some factors obstructing the bilateral dialogue, including Latvia’s unfriendly moves towards some Russian cultural figures and politicians, as well as the unfavourable situation affecting the rights of ethnic Russians. The problems of massive “non-citizenship” and the promotion to heroic status of former Waffen-SS legionaries were also duly noted.