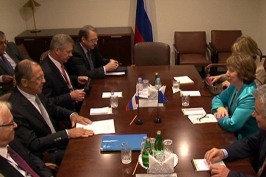 On 24 September a scheduled meeting in the framework of the Russia-EU Political Dialogue between Russian Minister of Foreign Affairs Sergey Lavrov and EU High Representative for Foreign Affairs and Security Policy/Vice-President of the European Commission Catherine Ashton took place in New York on the margins of the 68th UN General Assembly session.

The parties addressed a number of key issues of Russia-EU relations, including the state of play in the visa dialogue, as well as topical subjects on the international agenda, including the situation in Syria, prospects of Israeli-Palestinian negotiations, role of the Middle East Quartet and efforts aimed at political solution for the Iranian nuclear programme.