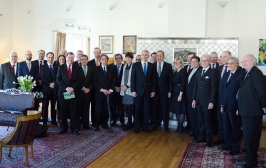 On 23 November Foreign Minister Sergey Lavrov held a regular meeting in Moscow with the heads of diplomatic missions of EU member states and the head of the EU delegation to Russia.

Mr Lavrov stressed Russia’s resolve to restore cooperation with the European Union. The ambassadors of the EU member states spoke in a similar vein.

The Foreign Minister gave the representatives of the EU diplomatic corps a detailed update on the developments in Syria, emphasising the goals of a rapid political settlement and effective humanitarian support to that country’s citizens, as well as the fight against international terrorism. The officials also discussed Ukraine issues and other current international topics.