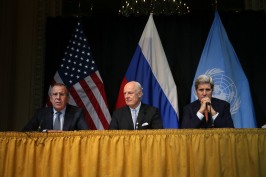 Foreign Minister Sergey Lavrov’s remarks and answers to media questions at a joint press conference with US Secretary of State John Kerry and Special Envoy of the UN Secretary-General for Syria Staffan de Mistura following a meeting of the Syria Contact Group, Vienna, 30 October 2015

Today, we had a meeting which probably can be referred to, as Special Envoy of the UN Secretary-General for Syria Staffan de Mistura suggested, a Syria Contact Group, or Syria Support Group. As US Secretary of State John Kerry, who made a decisive contribution to our work today, just mentioned, this group has for the first time brought together at one table all states, which, to varying degrees, influence the developments in Syria.

For a long time now, almost since the outset of the crisis, we have advocated for using the principle of inclusiveness in this work, both in terms of organising the inter-Syrian political process and in terms of the format of external sponsors and external players, who will provide support to the Syrian political process. I think that today’s meeting consolidated the understanding that this is the way it should be. US Secretary of State John Kerry spoke at length about what is happening in Syria, the sufferings of the Syrian people, how much blood was shed, and how many people lost their livelihood, and were forced to leave their homes. We want to put an end to this situation, and to prevent terrorists from seizing power in that country. Everyone who spoke today, without exception, mentioned the need to fight terrorism. Importantly, we agreed (and this is included in the joint statement) to firmly and consistently combat the Islamic State and other terrorist groups, which are recognised as such by the Security Council, and also to hold additional consultations to agree on the list of other organisations that have not yet been included in the UN list, but clearly are terrorists.

Russia has invariably spoken in favour of combating terrorism based on a solid foundation of international law, which requires the consent of the government in question or the UN Security Council resolution in the event of military operations conducted by air forces, or land forces and their contingents. We are going to stick to this position. In light of the decisions taken by President Obama, which US Secretary of State John Kerry has just apprised us of, our position hasn’t changed. We advocate that, in the face of a common enemy, we should find a way to fight it in a legitimate and concerted manner.

I also want to highlight the agreements that are now part of the joint statement. We all agreed that we would work together towards ensuring the unity, independence, secular nature, and territorial integrity of the Syrian state, as well as towards preserving its public institutions. The rights of all Syrians regardless of their ethnic or religious backgrounds must be protected and guaranteed. There must be humanitarian access in place to those in need, and assistance to refugees and internally displaced persons must be continued and expanded.

One of today’s most important achievements is that the participants decided to reach out to the UN, asking it to convene representatives of the Syrian Government and opposition to kick off a political process. This political process should result in the parties’ agreement to jointly establish an inclusive entity, which will make it possible to jointly address issues related to the country’s life, to draft a new constitution, and to hold general elections. We agreed that the elections should be held with the active involvement and supervision on behalf of the UN, and that all Syrian citizens should be able to vote, regardless of their place of residence, including refugees in neighbouring countries.

The participants also discussed the possibility of declaring a ceasefire in parallel with the political process. It was decided to continue these consultations with the participation of the UN, with the clear understanding that if a ceasefire is announced, not a single terrorist group will fall under these arrangements. As Mr Kerry mentioned, we haven’t agreed on the future of Syrian President Bashar al-Assad. Russia is convinced that this issue should be addressed by the Syrians themselves as part of the political process. Our joint statement confirms that the Syrians must own the political process, and the Syrian people should determine the future of their country.

At the end of the day today, some of our colleagues said that observers and journalists could get the impression that we have only “covered up” certain fundamental disagreements. This is not true. We are discussing these major disagreements, in particular, with you. I’m convinced that the principles that we formulated today in our joint statement allow us to start working in earnest. Most likely, it won’t be quick and easy, but this work will help us build confidence, including between countries of the region, which don’t see eye to eye on major issues. Today, they sat at one table and talked to each other. I’m confident that by building trust, we will be able to create proper conditions for the Syrians, so that they can show wisdom and agree on the future of the nation.

Today, everyone showed their willingness to compromise. I hope that this willingness will grow stronger in the course of our future meetings, which we agreed upon. The next one will be held no later than two weeks from now. We will decide on a specific date later. I would like to note the special role of US Secretary of State John Kerry in our meeting, and to thank Special Envoy of the UN Secretary-General for Syria Staffan de Mistura and his staff for their support and cooperation, and to wish them success. An important mission now falls on their shoulders.

Question: Do you think that President Obama’s decision to use special ground forces in Syria may intensify what some refer to as a “proxy war,” in which the United States supports the rebels, whereas Russia, as you mentioned a few minutes ago, does not believe that President al-Assad should go? We believe that Russian air forces attack some rebel groups that are supported by the United States.

Sergey Lavrov: I didn’t say that President Bashar al-Assad should stay or go. I said that Bashar al-Assad’s fate should be determined by the Syrian people, just like everything else that has to do with the future of the Syrian state.

Regarding concerns that the Russian Aerospace Forces deliver strikes at the positions of groups supported by the United States, and, in general, groups that are not terrorists, it should be noted that Russia has from day one of its operations in Syria, which are, notably, carried out upon the request of the Syrian government, proposed coordinating our actions with the United States. So far, our American colleagues have gone only as far as agreeing to a military-to-military de-confliction. However, we are confident that we can do better and fight terrorists more effectively. I very much hope that our agreement today to draft a list of terrorist groups in Syria will allow us to move in this direction. I have already voiced our assessment of President Obama’s decision to send ground troops to (as announced) fight ISIS unilaterally, without coordinating it with the Syrian leaders.

I’m convinced that neither the United States, nor, of course, Russia want to slide into a “proxy war,” but the fact that this situation makes military cooperation between us even more important is obvious to me. We have a common enemy, and we need to do our best to make sure that the enemy can’t take over either Syria, or any other state.

Question: Did you agree on the prerequisites and the time for introducing a ceasefire in Syria today?

Sergey Lavrov: We discussed it in general terms. We agreed that we would continue this discussion in conjunction with our colleagues from the UN. We didn’t discuss any terms, except one: the ceasefire terms won’t include terrorist groups and our fighting them.

Question (to Foreign Minister Sergey Lavrov and US Secretary of State John Kerry): Today, you had talks about Syria without the Syrians. Does the Syria Contact Group plan to invite the Syrian delegates to its sessions?

Sergey Lavrov (speaking after Staffan de Mistura and John Kerry): I agree with what was just said. First of all, we got together to reach an agreement on at least some issues among ourselves and encourage the parties to resume a direct dialogue. We have yet to see a single delegation representing the Syrian opposition. We also discussed this today. Special Envoy of the UN Secretary-General for Syria Staffan de Mistura and his team will also deal with this matter.

We all thanked each other for doing a good job. I would like to convey our appreciation to Austria’s leaders and the City of Vienna, as well as all Austrians, for their traditional outstanding hospitality. We’ll be back soon.