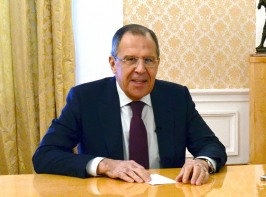 Today we celebrate for the 14th time Diplomats' Day, a day which symbolises the continuity of many generations of Russian diplomats who have served their Fatherland in the interests of the people. The date, February 10, was chosen upon the discovery of the earliest thus far mention of a Russian diplomatic department in 1549. But the traditions of Russian diplomacy developed long before that. For example, legend has it that in 957, or more than a thousand years ago, Princes Olga visited Constantinople where she conducted successful negotiations.

Today our diplomats are working in conditions of acute tension around the world and face many challenges, primarily terrorism and other forms of organised crime, drug trafficking, the increasing dangers of climate change, food shortages in large parts of the world, despite food oversupply in other regions, and many other problems. These threats and challenges cannot be handled unless we join our efforts.

Russia has been consistently implementing a foreign policy that has been sealed in a concept approved by President Vladimir Putin, which instructs us to work in the interests of national security and in close cooperation with all those countries willing to do so on an equitable basis and with due respect for international law, primarily the central role of the UN. Guided by this collective approach and respect for the interests of all members of the international community, we have achieved many of our goals last year. We reached an agreement of singular importance on the settlement of Iran’s nuclear programme, completed chemical demilitarisation in Syria and coordinated a very important document at the UN Climate Change Conference in Paris, France.

At the same time, we know that we did not attain all our goals last year. The number of conflicts and crises is not decreasing. The main reason for this is that, apart from the policies of most nations towards the development of collective partnership based on mutual respect, other countries are pursuing a policy that is based on a logic of diktat, trying to force their views and values on others in order to dominate the world. This policy has had a negative effect on a number of conflicts in the Middle East and North Africa, including Iraq, Yemen and Libya, the latter was subjected to crushing NATO bombing raids in 2011. Unfortunately, we are witnessing the attempts to pursue the same unilateral, egoistical line with regard to the Syrian crisis and to create advantages for a specific group of countries. I hope that common sense will prevail in all of the above mentioned situations and other conflicts in Africa and other regions of the world, and that we will draw the proper conclusions from last year’s lessons and will act exclusively on the basis of mutual respect, equality and recognition and implementation of the UN’s central role. President Putin has formulated this task for us. I’m confidents that all our diplomatic employees will work in strict compliance with this line in the interests of the country and the well-being of the people.

I’d like to congratulate all employees of the central staff of the Ministry of Foreign Affairs and also all those who are working in the ministry’s representative offices in Russia and abroad. My special thanks go to our veteran workers, who are still with us and who are sharing their rich experience and knowledge with the younger generation.