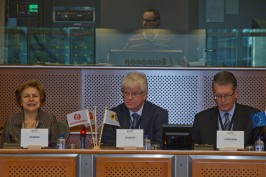 The participants discussed issues related to Russia-EU relations, youth problems, as well as threats stemming from the rise of right-wing extremism and neo-fascist movements in Europe.

The Forum adopted Recommendations addressed to the forthcoming Russia-EU summit in Brussels, including appeals to abolish visas, to recognize Russian as one of EU languages, to respect the rights of Russian speakers in EU Member States.

The Forum sent a message of congratulation to Patriarch Kirill of Moscow and all Russia to mark his 65th anniversary.

The European Russian Forum has been taking place since 2007 with the support of the MFA of Russia and Russian Federal Agency for International Humanitarian Cooperation.

The Permanent Mission of Russia to the EU thanks the organisers of the Forum and particularly Tatiana Zhdanoka, MEP for their role in holding this important annual event.