Exhibition “The Way to the Joint Victory over Nazism: From Stalingrad to Prague” at the European Parliament 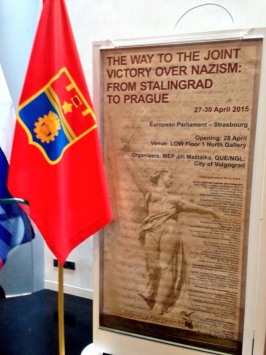 28 April 2015 saw the opening on the European Parliament premises in Strasbourg of an exhibition “The Way to the Joint Victory over Nazism: From Stalingrad to Prague”. The event was organised at the joint initiative of Dr. Jiři Maštalka, Member of the European Parliament from the Czech Republic, and the Administration of the city of Volgograd with the assistance of the Permanent Mission of the Russian Federation to the EU in the framework of celebrations of the 70th anniversary of the Victory in World War II.

The exhibition aims to remind of the tragedy of war and heroism of the fighters against fascism, of our joint Victory, for the sake of which people of different countries managed to unite in the struggle against the “brown plague”. It pays tribute to the Soviet soldier who brought to Europe freedom from Nazi slavery and extermination, as well as recalls that the battle of Stalingrad became a historic milestone from which contemporary world and particularly today’s Europe largely stem.

On the day of inauguration the exhibition was also attended by the President of the European Commission Jean-Claude Juncker, Chairman of the EP Foreign Affairs Committee Elmar Brok and other dignitaries.

Speakers at the inauguration stressed the role of historical truth as a most important means of countering attempts to falsify history, underlined that the moral duty of today’s generation is to ensure peace and stability paid by so many lives. The only way to achieve this is to strengthen cooperation, support people-to-people contacts on our continent and contribute to building a single Europe without dividing lines.

Address by Ambassador Vladimir Chizhov at the inauguration of the exhibition