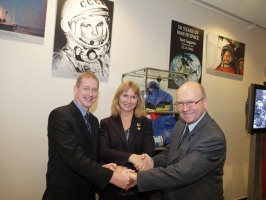 An exhibition devoted to the 50th anniversary of the flight of Yury Gagarin to space was held in the European Parliament on 21-25 March 2011. It was organized by Vladimír Remek, first Czechoslovak cosmonaut, first non-USSR and non-US man in space, member of the European Parliament, with the assistance of the Permanent Mission of the Russian Federation to the EU.

Photos devoted to the historic flight of Yury Gagarin, further space exploration and achievements of Russia-EU space cooperation, as well as models of Russian carrier rockets and Vostok and Soyuz spacecraft and other objects, including those related to the flight of Belgian cosmonaut Frank De Winne were presented at the exhibition.

Members of the European Parliament, delegation of the Federal Assembly of the Russian Federation which was in Brussels at that time, cosmonauts participated in the inauguration of the exhibition which took place on 21 March 2011. Vice-President of the European Parliament Libor Rouček, Permanent Representative of the Russian Federation to the EU Vladimir Chizhov, Chairman of the EP “Sky and Space” intergroup Vittorio Prodi, co-chairs of the Russia-EU Parliamentary Cooperation Committee Knut Fleckenstein and Andrey Klimov, cosmonauts Vladimír Remek, Elena Kondakova and Frank De Winne made welcome speeches.

Ambassador Chizhov underlined in his statement that space exploration was initiated by the historic flight of Yury Gagrin. He reminded of the most important landmarks on this path – landing of man on the Moon, flight of Czechoslovak cosmonaut Vladimír Remek, creation of the International Space Station. He spoke of fruitful cooperation between Russia and European Space Agency.