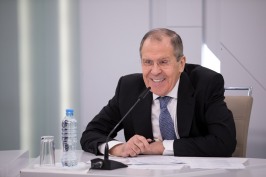 The coronavirus pandemic has become a major challenge for all countries and many international organisations. It should certainly compel us to ponder over what is happening in the world, and also to understand how we should live in the future and how we should advance to ensure peaceful, safe and stable future for all humankind.

It has long been clear, and the pandemic has confirmed it definitively, that we live in an interdependent and intertwined world. In the age of the free movement of people, capital, services and goods in the whole world, threats also move freely. We have faced terrorism, drug trafficking, other forms of organised crime, the threat of the proliferation of weapons of mass destruction and now the threat of the pandemic that knows no borders and from which it is impossible to fence ourselves off.

It is clear that under these conditions we must adopt collective approaches to international relations. Concepts and practices of hegemony and domination are absolutely inappropriate in the 21st century.

I would like to draw your attention to an important conceptual issue that we have paid much attention to recently. I mean the trend of our Western partners to make fewer references to international law or even remove it from the international lexicon altogether. Instead of the well-established term “international law” they are attempting to use a new expression, “a rules-based order.” We see how this concept is taking shape and being used by our Western partners in practice. Their approach to issues goes beyond universal, multilateral institutions. They want to uphold their exclusive position on these issues and do not want to negotiate.

We are celebrating the 75th anniversary of Victory in World War II and the 75th anniversary of the UN. I think this is a good reason for all of us to unite and concentrate on consolidating universal mechanisms rather than on creating flawed alternative structures in order to replace multilateral diplomacy with different terms, such as “a rules-based order” or the newly coined expression, “the Alliance for Multilateralism.”

Those who want to support multilateralism must recognise that the only and true multilateralism is embodied in the UN which has unique legitimacy. Therefore, supporters of multilateralism must come to the UN and come to terms with all other countries there, instead of negotiating within the narrow circle of soulmates and imposing their opinion on others as universal and the only correct approach.

But the question of what must be done [concerning situation in Libya] is more important at this point. Russia, our Italian colleagues and many other European states and countries in the region have reached a fairly good understanding. We agree that this conflict does not have a military solution and that it is necessary to come to terms. Russia and many other countries, including Turkey, Egypt, the UAE and Qatar are working to launch a political dialogue.

Now the European Union has decided to help monitor the observance of the embargo on arms supplies to Libya. This is a noble cause but… we have discussed this issue with our European friends several times in the past few months. I spoke with Josep Borrell, Heiko Maas and Luigi Di Mayo. I think the European Union must go to the Security Council and say, “The Security Council has announced an arms embargo and it must be fulfilled. We, the EU, want to carry out one more special operation on monitoring compliance with this embargo. It consists of such and such parts. We would like to ask the Security Council to support our approach.”

The fact that the EU is doing everything it can to avoid presenting its ideas to the UN Security Council makes us wonder about its motives. I hope we will soon be informed as to what they are thinking.

Right now the European Union, like all of us, is going through difficult times, but this crisis coincided with the growing debate about the balance between the functioning of supranational institutions and the responsibilities of national governments. This is a very important issue; we can see how actively Brussels and many capitals are discussing it, including regarding the rights the national governments should have and the rights that are or will be delegated to central, supranational institutions. Of course, we also discuss this issue within the EAEU. We should always learn something useful from a crisis, and the way these issues are solved in the EU will be very useful for us in finding ways to address similar tasks within the EAEU.

You said there are people in Poland who believe it is a good thing that the relations between Russia and the EU are bad. I can assure you that there are people in Russia who are happy that the relations between Poland and the EU are not so good either. If we keep looking for things to gloat over, then instead of politics we will be engaged in politicking and trying to satisfy our own or someone else’s ambitions.

The European Union – and we see and hear this as it is declared publicly – is approaching the moment when it will have to decide whether to review the “five principles” invented by Federica Mogherini for relations with Russia or to leave them intact. I know that Poland stands for keeping them in place. Many other countries also speak in favour of making no changes. A number of other EU members believe that the situation should be considered realistically, basically proceeding from the interests of the EU nations and the EU economies.

We will be ready to talk with the European Union under any circumstances. Actually, we are doing it now. But the “five principles” are being employed by some countries to block the resumption of sectoral dialogues, and we used to have over twenty of them: in energy, culture, human rights, transport, healthcare, finance, and so on. We used to have two annual summit meetings. We used to have the Permanent Partnership Council (it exists only on paper now) to review assessments of progress on agreements across the whole scope of our relations. All that is now frozen. We are being accused, including by Poland, that Russia is trying to undermine the EU authority and speaks with the capitals of member-countries – Rome, Paris, Budapest – rather than with Brussels. It is not our malicious intent, it is just the circumstances as they are. If Brussels froze all the channels while the capitals of the member countries advocate the development of bilateral relations, we will definitely respond.

The EAEU is a rather young association; it is much younger than the EU. Of course, we are making efforts to build on the EU's positive experience, while taking into consideration the mistakes made during the integration process - yet our foreign colleagues' experience will never be enough to solve all issues in the EAEU.

As for the future of the European Union, I cannot imagine such an outcome [its complete collapse], even theoretically.

In this context, the best solution would be to establish contacts between the EAEU and the EU. We discussed proposals to this effect back in 2015, and Brussels is still exploring them. The Eurasian Economic Commission (EEC) has submitted the corresponding proposals on behalf of the EAEU to the European Commission several times. The response was initially outright negative, but Brussels became more receptive to dialogue with the EEC once it realised that EAEU member countries have delegated many of their functions to the supra-national level. So far this has been limited to technical matters, such as technical regulations, rules governing various sectors, etc. But this is already a start. These are practical steps that we can build upon to build up our cooperation. We stand for promoting a strategic partnership across the Eurasian continent.

After all, Eurasia covers a huge territory shared by the EU, the EAEU, the SCO and many ASEAN countries as well. It is also here that most of the projects as part of China’s Belt and Road Initiative are carried out. It is for this reason that back in May 2016 at the Russia-ASEAN Summit held in Sochi President of Russia Vladimir Putin proposed establishing the Greater Eurasian Partnership that would be open to member countries from all these associations, including the EAEU, the SCO, ASEAN, as well as European Union countries and the EU itself.

Sharing this vast territory gives us substantial comparative advantages. It would be strange for us not to benefit from these advantages and instead to continue down the road of confrontation (I have already mentioned the confrontational scenarios, including the Eastern Partnership and EU’s strategy on Central Asia). What we stand for is building a Greater Eurasian Partnership by gradually reaching mutual understanding in an increasing number of spheres with a clear benefit for all the parties involved. I think that moving in this direction would make it easier for the European Union to overcome its internal challenges, while the EAEU will be open to cooperation in the interests of its member countries.