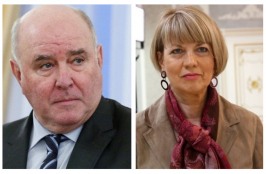 The officials had a substantial exchange of views on the situation in the former Soviet Union area. The Russian side stressed that partners must adhere in their efforts to respectful and equal approaches based on careful attention to interests and traditions of the countries of the region, cultural, historic ties and integration achievements they have accumulated, as well as mutual rights and obligations within the regional organisations they have founded.

The two sides discussed prospects of promoting cooperation between the EU and the EAEU.