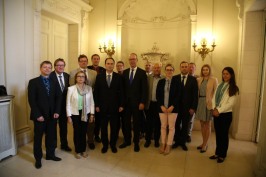 On 29 June 2016 Mr. Karen Malayan, Deputy Permanent Representative of Russia to the EU and Euratom, met in Brussels a delegation of the German-Russian Economic Alliance.

The parties discussed topical issues related to the promotion of economic relations between Russia and Germany, as well as other EU Member States, against the background of the EU sanctions policy. Representatives of German business underlined the negative impact of the restrictive measures on EU companies and called for their lifting as soon as possible. Mr.Malayan stressed that Russia stands for the development of mutually beneficial and good neighbourly relationship with all countries of the European Union that remains one of its major economic partners. As for the sanctions, it was the EU that initiated them in the first place and it should be an EU’s decision to lift them.

The German-Russian Economic Alliance was founded in 2003 and comprises Russian and German business representatives (www.deruwia.de).