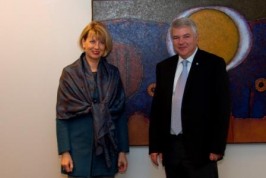 A wide range of issues was addressed related to Russian-EU cooperation, including visa facilitation and transition towards visa-free travel regime between Russia and EU member states, enhancing trade and economic ties and investment cooperation, progress in energy dialogue, intensification of negotiations on the Russia-EU New Basic Agreement, and strengthening cooperation in the framework of the Common Space of Freedom, Security and Justice and the Common Space of External Security. The parties focused on primary areas of Political Dialogue, including preparation of the next Russia-EU summit scheduled for the end of the year.

An interested exchange of views took place on a number of most topical international issues, including settlement of the situation in the Middle East and North Africa, cooperation with the EU in the framework of the OSCE and the Council of Europe, as well as prospects of harmonising integration processes in Europe and Eurasia.

The next meeting of Political Directors is scheduled for the first half of 2014.