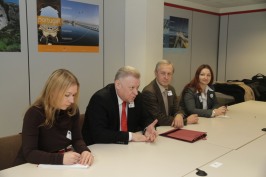 Mr. Alexander Udaltsov, Ambassador at Large in the Ministry of Foreign Affairs of the Russian Federation, in charge for the Kaliningrad Oblast issues, visited Brussels on 8-9 February 2011. He held the consultations with Mr. Miroslav Lajčak, Managing Director for Russia, Eastern Neighbourhood and Western Balkans of the European External Action Service, Mr. Jean-Louis De Brouwer, Director DG-HOME and Mr. Marcus Cornaro, Director DG-DEVCO of the European Commission. A wide range of issues related to social and economic development of the Region, as well as prospects for Russia-EC cooperation in this area were discussed during the consultations.

Special attention was given to possible EU local border traffic regime adaptation to Kaliningrad Oblast with due respect to its specific geographical position. The participants exchanged views on ways to address the issue.