Conference on Russia-EU relations at the European Parliament 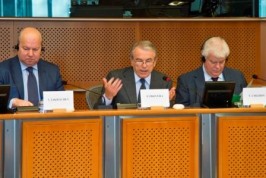 Participants included Ambassador Vladimir Chizhov, Permanent Representative of Russia to the EU, Vassily Likhachev, Member of the Russian State Duma Committee on CIS Affairs, Eurasian Integration and Relations with Compatriots and Sergey Markov, Member of Civic Chamber of Russia. Issues related to Russia-EU relationship, its state of play in the light of developments in Ukraine were discussed with Members of the European Parliament and national parliaments of a number of EU Member States, as well as the goal of joint efforts in finding solutions to emerging crises, using, inter alia, the potential of interparliamentary contacts.

Those present at the Conference expressed concern over the rise of anti-Russian sentiments in the EU, stressed that dialogue between the EU and Russia had no alternative. They emphasised that genuine reasons behind the Ukranian crisis which had resulted to a large extent from miscalculated EU “Eastern Partnership” policy should be established. Numerous facts of human rights violations in Ukraine demanding prompt reaction of the EU human rights bodies were cited.