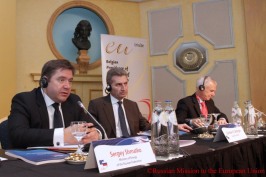 A conference dedicated to the 10th anniversary of the Russia-EU Energy Dialogue took place in Brussels on November 22, 2010. Minister of Energy of the Russian Federation Sergey Shmatko, Minister for Climate and Energy of Belgium Paul Magnette, European Commissioner for Energy Gunther Oettinger, Deputy Chairman of the State Duma of Russia Valery Jazev, Permanent Representative of the Russian Federation to the EU Ambassador Vladimir Chizhov, Director General for Energy of the European Commission Philip Lowe, Director General for Research of the European Commission Robert-Jan Smits, representatives of major energy companies from Russia and EU member states, industrial associations, academic circles participated in the Conference.

On the same day the 5th session of the Permanent Partnership Council on Energy was held under the co-chairmanship of the Minister of Energy of the Russian Federation Sergey Shmatko, Minister for Climate and Energy of Belgium Paul Magnette and European Commissioner for Energy Gunther Oettinger. The 11th Progress Report of the Russia-EU Energy Dialogue coordinators was signed during the session.

Participants to the Conference and the session of the Permanent Energy Partnership Council stressed the strategic character of Russia-EU cooperation in the energy sphere, growing interdependence of their energy complexes that serves as a factor of stability on European energy markets.
Interaction between Russia and the EU in the gas sphere was in the centre of attention. It was stressed that Russia is and will in the foreseeable prospective continue to be the biggest external partner of the EU in this sphere. The forecasted increase of gas consumption in EU countries allows to welcome all infrastructure projects meant for delivery of gas to Europe.

The issues of renewable energy sources, of cooperation in the field of nuclear energy, of interaction in the framework of Partnership for Modernisation, the role of new technologies were also discussed.