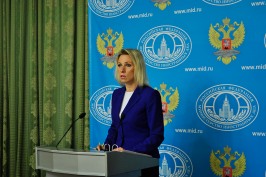 Russian experts have yet to examine the report on the technical investigation into the crash of the Malaysian Boeing airliner carried out by the Dutch Safety Board, and will probably share detailed comments on this issue. For now, we would like to note that we had repeatedly voiced misgivings about how the investigation was conducted. Unfortunately, the situation has remained unchanged in this respect.

By way of a reminder, it should be said that Russia has been calling for an unbiased, comprehensive and transparent investigation into the Malaysian Boeing crash from the outset. From the very beginning, we were seeking to take part in efforts by the group of experts in a constructive manner and make a maximum contribution. Of course, we expected Russian experts to be able to access all the information available to the group. Russia set in motion the adoption by the UN Security Council of Resolution 2166 which contains provisions describing how the investigation is to be carried out. Unfortunately, Russia’s proposals to carry out the investigation in such a way as to ensure its transparency relying on the Security Council were ignored, as were our calls to abide by the said resolution. Disregarding the Resolution, the UN Secretary-General failed to identify and report to the Security Council any possible options for the United Nations to support the investigation. The questions that Russia circulated in the UN Security Council in September 2014 have also been left unanswered.

Russian experts have not been given access to full investigation materials. It is our understanding that the report on the crash by experts from Almaz-Antey, the main developer of Buk missile launchers, has also been ignored. In addition, Dutch colleagues have not responded to the invitation to visit Russia to study Almaz-Antey materials on the Boeing crash. At the same time, Statements by Almaz-Antey and the Federal Air Transport Agency representatives, who submitted their critical remarks to the investigation group on numerous occasions, suggest that they have gone to great lengths in their investigation. Consequently, there are still serious doubts that the true goal of the Dutch investigation was to establish the real causes of the crash, not justify pre-emptive accusations.

We cannot fail to note that Russia’s demands that Ukraine produce military air traffic control recordings to the international community, along with information on the operations of Ukrainian air defence forces in this region, which is already an established fact, have been left unanswered.

Russia has also stressed that the emergence, one year after the start of the investigation, of reports on the discovery of missile elements that had allegedly caused the aircraft to fall apart is strange, as is the initiative to send a new expedition of Dutch experts to the crash site to recover the remaining aircraft parts, while all such parts had been reportedly removed from the crash site a long time ago.

These are just a few of the questions regarding the investigation that Russia has. It is clear that its results could not have been unaffected by the way it was carried out. The fact that Ukraine is directly responsible for failing to close its airspace for civil aircraft is undeniable and has been confirmed by the investigation commission.

Continuing the investigation with the necessary adjustments and ensuring the participation of all countries that possess materials that could shed light on the MH17 crash could be a way out of this situation. It goes without saying that Russia stands ready to join these efforts.