Comment on new instances of the glorification of Nazism in Latvia 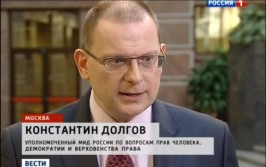 Comment by Konstantin Dolgov, Russian MFA Commissioner for Human Rights, Democracy and Rule of Law,  on new instances of the glorification of Nazism in Latvia

On September 11, 2015, a monument to the so-called “Forest Brothers” was unveiled in the town of Ile in Latvia.

As a reminder, the Forest Brothers group, which operated in Kurzeme and consisted predominantly of former members of the Latvian Waffen SS legions, killed from 1,500 to 3,000 people, by various estimates, including innocent civilians.

The idea of the monument winning the local authorities’ approval is dismaying. Some 300 people, including representatives of the country’s Armed Forces, attended the ceremony. Saeima Speaker Inara Murniece greeted those gathered.

We regard yet another cynical act of lauding the Nazi criminal henchmen in Latvia as an insult to the memory of the millions who gave their lives in the war against the “Brown Plague.”

We urge the international community and human rights organisations to pay close attention to and make proper assessments of the outrageous instances of the glorification of Nazism in Latvia.