Closing ceremony of the Russia-EU Year of Science 2014 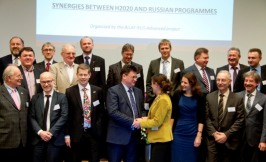 A number of meaningful events were held in Brussels on 24-25 November in the framework of the official closing ceremony of the Russia-EU Year of Science 2014. Representatives from the Ministry of Foreign Affairs, the Ministry of Education and Science of Russia and the European Commission took part in the ceremony.

The main event was a workshop conference where representatives from Russian and EU academic communities highly appreciated the level of bilateral research cooperation and defined priority areas for further interaction. It was agreed that aeronautics, space, IT, green and renewable energy sources, climate change, biotechnologies, new materials and nanostructures are the most prospective areas for launching joint research projects.

The Parties also discussed new mechanisms for participation of research groups in joint projects under the “Horizon 2020” EU research and innovation programme and the Russian Federal Targeted Programme on research and development in priority areas for 2014 - 2020.

The Year of Science was launched in Moscow on 25 November 2013 with participation of the Deputy Chairman of the Russian Government Ms. Olga Golodets, the Russian Minister of Education and Science Mr. Dmitry Livanov, and the Member of the European Commission for research, innovation and science Ms. Maire Geoghegan-Quinn.

Throughout the year, some 200 workshop conferences and other events were held in different cities of Russia and the EU with active participation of leading universities, research centers, innovation companies, enterprises and research foundations. All necessary conditions were put in place to allow every participant to present his or her achievements and plans for future joint projects to the public and expert community. Marking another result of the Year of Science, new long-term agreements were signed between Russian and the EU research organisations laying a solid foundation for further fruitful cooperation. In February 2014 the Russian Federation and the European Union agreed to extend for another five years the Agreement on Cooperation in Science and Technology signed on 16 November 2000 and serving as an appropriate legal basis for the relations in this sphere of mutual interest.

The events which were held reaffirmed: it is scientific knowledge and intellectual potential as well as ability and willingness of states and international organisations to support them that are the core factors of economic development in the modern world. New global challenges, such as climate change, food security, shortages in water and mineral resources and spreading of deadly viruses, require joint efforts of the global research community to conduct joint problem-oriented research programs taking into account national interests and priorities.

The Year of Science has clearly demonstrated the desire of Russian and EU science communities to establish and strengthen working relations and to develop practical forms of research cooperation. They will most certainly lead to new breakthrough discoveries and technologies which will allow to improve standards of leaving of all people on the planet.