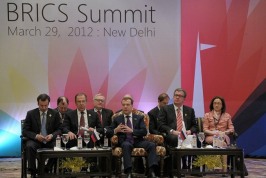 The Fourth BRICS Summit has concluded in New Delhi. The leaders of Brazil, Russia, India, China and South Africa taking part in the Summit exchanged views on the situation in the global economy, reforms of global management institutions, international stability and security issues.

Delhi Declaration was published following the Summit. The General Agreement on Granting Loans in National Currencies as Part of the Mechanism of the BRICS States' Inter-bank Cooperation and the Multilateral Letter of Credit Agreement were signed in the presence of the heads of BRICS development banks.

In addition, the document The Economies of the BRICS: A Report on Brazil, Russia, India, China and South Africa was submitted for consideration by the BRICS Summit participants.