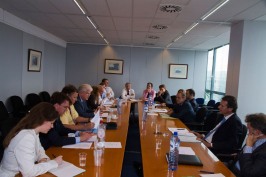 On 31 May 2012 an informal meeting (“brainstorming”) on the current state of play in the Russia-EU New Basic Agreement (NBA) negotiations took place in Brussels. It was attended by the heads of the negotiating delegations: on the Russian part – Ambassador Vladimir Chizhov, Permanent Representative of Russia to the European Union, on the EU part – David O’Sullivan, Chief Operating Officer of the European External Action Service (EEAS), as well as by leading experts of the Ministry of Economic Development and the Ministry of Foreign Affairs of Russia, the European Commission and the EEAS.

Special emphasis was placed on trade and investment provisions of the future agreement. Issues of the scope and content of the respective section of the NBA were considered, in particular in view of the establishment of the Common Economic Space between Russia, Belarus and Kazakhstan.

The “brainstorming” proved to be generally constructive. It is expected that the perspectives of further work on the NBA will be discussed, among other issues, at the forthcoming Russia–EU summit (Saint-Petersburg, 3-4 June 2012).