The Association of Lawyers of Russia visits Belgium and Luxembourg 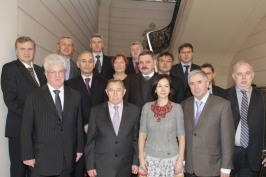 A delegation of the Association of Lawyers of Russia (ALR) headed by Mr. Veniamin Yakovlev, ALR Co-chairman, Advisor to the Russian President, visited Belgium and Luxembourg from 23 to 27 January 2011 at the invitation of the European Commission. The delegation included Mr. Vladimir Slesarev, Deputy Chairman of the Supreme Court of Arbitration, Mr. Alexandre Fedorov, First Deputy Minister of Justice, Mr. Sabir Kekhlerov, Deputy Prosecutor General, Mr. Artur Parfenchikov, Director of the Federal Service of Court Bailiffs, as well as representatives of the All-Russian NGO “Business Russia” and the Russian Academy on Public Administration.

Partners from the EU outlined the most essential changes in the EU institutional model after the entry into force of the Lisbon Treaty and the functioning of the European Commission’s Legal Service. Particular attention was given to the increased role of the Court of Justice of the European Union as an important factor of European integration.

The Russian side, in turn, shared information on the specificities of the functioning of Russian judicial system taking as an example the Constitutional Court and courts of arbitration, on the role of the Ministry of Justice and General Prosecutor’s Office in the Russian legal system, on the introduction of new technologies in the sphere of justice, more active participation of citizens in the law-making process.

The meetings showed that Russia and the European Union have generally similar views on the judicial system which is based on the principle of rule of law. It was decided that contacts between lawyers of Russia and the EU should continue.