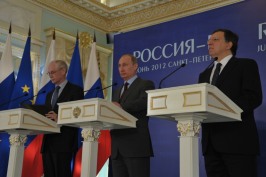 Time to enhance the security and economic pillars

Furthering the relationship with the European Union and incrementally progressing towards a common space of economic interaction, human contacts and regional security remains at the heart of Russia’s foreign policy. Our unwavering belief in the vitality of European integration as well as the EU’s ability to overcome the ongoing financial and economic calamities is best manifested by sheer numbers. Russia remains the EU’s third largest trade partner with steep rates of growth, having attained a total trade volume of 307 billion euros in 2011. Approximately 40 percent of Russia’s foreign currency reserves, again the third largest in the world, are nominated in the single European currency.