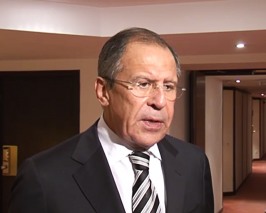 - How was the meeting with your EU counterparts?
- The conversation with EU High Representative for Foreign Affairs and Security Policy and 27 EU Ministers of Foreign Affairs lasted for about four hours. We discussed all possible issues on the Russia-EU agenda, as well as numerous global and regional topics.

In bilateral issues priority was given to the need to duly prepare for the summit between the Russian Federation and the European Union to be held in December in Brussels. It was our common view that, despite the recent difficulties and frictions over energy, the New Basic Agreement and other issues, the summit should be prepared in the spirit of strategic cooperation keeping in mind that we are strategic partners.

Many frictions arising in our economic cooperation are caused by the fact that, after Russia’s recent WTO accession, Russian authorities, companies and economic operators are adjusting to the new situation while EU partners are adjusting to us. The problems are not at all easy but all of them can be resolved. Our common view is that we should be guided by strategic perspectives taking into account that the EU is Russia’s largest trade partner. Last year trade volumes amounted to almost 400 billion US dollars and is likely to be even more this year. Both parties share the understanding that it is not somebody’s wish but rather an objective necessity and we must be as close to each other in all spheres as possible.

We have reminded our partners of the initiative proposed by President of Russian Vladimir Putin at the Russia-EU summit in early June in Strelna on joint development of economic and human spaces from the Atlantic to the Pacific. All prerequisites for that are in place with transition to visa-free regime being one of key instruments for achieving this goal. We stated that the list of common steps to be made to this end by Russia and the EU is being implemented. It was adopted almost a year ago. At the forthcoming summit a report will be presented on how the negotiated steps are being implemented and what still remains to be done.

Together with advancement towards visa-free regime we wish to finalise in the near future the work on the agreement on further liberalisation of the visa regime that would extent the categories of persons benefitting from preferential travel regime, including those who can travel without a visa. For the time being, the EU is considering our insistent proposal to include in the agreement on facilitation of visa regime all holders of biometric service passports. They are about 15,000 in Russia. To compare, in Germany they are about 30,000 and about 150,000 in the EU as a whole. We are ready to accept that all holders of service passports are entitled to visa-free regime on a mutual basis. The same approach has been negotiated between the EU and Ukraine. More than 50 countries have visa-free regime with the EU for holders of all passports.

In my view, we have a fair and open position. Today we explained this approach to our partners. I hope they got our message and the work on this issue will be completed in the near future.

As for global affairs, of course, we discussed the situation in the Middle East and the North Africa, as well as in Iran, Syria and Kosovo, the Cyprus problem, the nuclear problem of the Korean peninsula, the Nagorno-Karabakh and the Transnistrian settlement. Our colleagues asked for our evaluations of what is going on in Georgia. We confirmed that we are waiting for the new government to be formed and the ministers to take office. Further evaluations will be based on its concrete steps and positions to be declared with respect to the Russian Federation and the situation in the South Caucasus on the whole.

- You said earlier that 1 November was a certain time reference in negotiations on facilitation of the visa regime. Shall we expect from the EU any decision on service passports by that time?

- We hope so. On 1 November the moratorium on introduction of visa regime for airline crew members will expire. Under to the Russian legislation, crew members of foreign airline companies are not released from the need to have a visa. But for a long time, by mutual consent, there has been a visa-free regime for Russian airline crew members flying to the EU and the European ones flying to Russia. It runs contrary to our legislation. We want to eliminate this contradiction and therefore an intergovernmental agreement needs to be signed – an agreement negotiated with the EU in all its aspects except for the provision on mutual exemption from visa requirements for holders of biometric service passports.

We have already prolonged the moratorium on visas for airline crew members twice. 1 November is the deadline. We will hardly be able to further prolong it. We have warned our partners that, if the agreement cannot be signed in October, airline companies will have to ensure multiple visas for their crew members. We will be ready to issue them in a timely manner, without any complications. Let me remind you that Russian has bilateral agreements with almost a half of EU member states exempting airline crew members from visa requirements. This is another way to resolve the problem: we have such agreements with 12 countries and are negotiating on them with 8 member states more.

- Today you said that Russia is ready to legalise the Geneva Communiqué in the UN Security Council. What did you mean by that?

- Legalising is not the right term. The Geneva Communiqué is a legitimate document, a product of consensus reached by all permanent members of the UN Security Council, Turkey, the Arab League, the EU and the UN Secretary-General.

What we proposed was adopting this absolutely legitimate and consensus-based document in the Security Council for giving it additional force. The main task is not to make it legally binding but to ensure the compliance with it. Therefore it is needed that all those having influence on various Syrian parties fulfill the two main conditions of this document. First, they should make all combatting parties to simultaneously stop violence with UN observers coming back to the country to monitor who and how much complies with the obligations. Second, they should bring all to the negotiation table to agree on composition of the transitional government body that would exercise the whole power and prepare the new draft constitution and the elections. That is it, that is very simple.

If our partners insist, however, that the government first stop military actions and withdraw its forces from all cities and populated areas, it will bring no good. The government will not go for it, as it has already done so several times: in autumn last year and when the Annan Plan was adopted. As soon as government forces leave cities, opposition forces occupy them. This should be done simultaneously, by both parties. Therefore, pressure should be exercised on all involved in military actions – both government and the opposition.

- Human Rights Watch has declared that Syrian air forces use Soviet cluster bombs. Has this information been confirmed?

- There is no confirmation, I have seen a TV report but I can give no comments.

There is plenty of weapons in this region. Now weapons are being supplied illegally and in large quantities both to Syria and other countries of the regions. Contractors are fighting there, there are also foreign instructors. It has already been confirmed in independent press publications, including the British Daily Telegraph whose correspondent has been to the area of Idlib in a militants’ camp where, as she said, she found instructors – former servants of special task forces from one of Scandinavian countries. You see, the geographic spread of internalisation of this conflict is quite wide. The weapons are abundant, the region is oversupplied. It is very difficult to find out who supplies ammunition and other weapons and from where.

As you know, there are talks of Soviet origin of this cluster ammunition. We and most Eastern European countries which were members to the Comecon and the Warsaw Treaty Organisation cannot so far find the truth as for signing agreements on their production of former Soviet equipment without a license. So, there is a need to sort it out.