Answers to questions from French journalists from TF1 TV channel 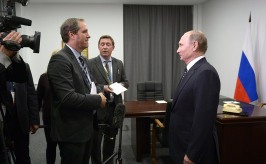 The interview was recorded on October 11, 2016 in Kovrov, Vladimir Region.

President of Russia Vladimir Putin: How did you end up here? This is a just a small provincial town. These days, you find French people wherever you go in Russia, in every village. This is very good and we are pleased to see it.

Question (retranslated): Mr President, could you explain why you are not going to Paris?

Vladimir Putin: It’s very simple. We had planned to hold an official opening ceremony for the newly built Russian religious and cultural centre in Paris. From the looks of things though, this is not the best moment for official meetings, given the lack of mutual understanding, to put it mildly, that we have over events in Syria, particularly the situation in Aleppo. But we are always open, of course, to any consultations and dialogue on this matter.

Question: This is exactly what the French hoped for – to use this opportunity to discuss the situation in Syria, but it is for this reason that you are renouncing this visit.

Vladimir Putin: You know, it is not that we are renouncing the visit, but simply that we were told that the main reason for this visit, namely, opening the religious and cultural centre, is not appropriate at this moment. But if the main reason for my visit to Paris is not appropriate, we will probably find another opportunity to meet and discuss Syria. We set no limitations concerning this matter and we are open for dialogue.

It’s simply that it was made known to us that now is not the most convenient time for the events that were planned, that’s all. We are not renouncing the visit.

Question: Many Western representatives, including [US Secretary of State John] Kerry, [French Foreign Minister Jean-Marc] Ayrault and even [French President] Francois Hollande have used tough rhetoric against Russia over the airstrikes against Aleppo, which have hit civilian targets and even hospitals. Some have even used expressions such as “war crimes.” What is your response to this?

Vladimir Putin: I would say this is political rhetoric that does not have great significance and does not take into account the real situation in Syria. Let me explain what I mean. I believe deeply that some of the responsibility for what is happening in the region in general and in Syria in particular lies especially with our Western partners, above all the USA and its allies, including the main European countries.

Remember how everyone rushed to support the Arab Spring? Where is that optimism now? How did it all end? Remember what Libya or Iraq looked like before these countries and their organisations were destroyed as states by our Western partners’ forces?

Certainly, these were not examples of democracies as we understand the word today, and there probably was a need and possibility to influence these societies’ organisation, the state organisation, and the nature of these regimes. But whatever the case, these states showed no signs of terrorism. They were not a threat for Paris, for the Cote d’Azur, for Belgium, for Russia, or for the United States.

Now, they are the source of terrorist threats. Our goal is to prevent the same from happening in Syria.

I know your question about refugees. This is what you wanted to ask, it seems? If not, let me address this question all the same. Let’s recall that the refugee problem began long before Russia started making efforts to normalise and stabilise the situation in Syria. The mass departure of people from huge swathes of the Middle East and from Africa and Afghanistan too began long before we started active operations in Syria.

There is no justification for accusing Russia of being responsible for the refugee problem. Our aim is, on the contrary, to create conditions for people to be able to return to their homes.

Regarding the humanitarian situation in Aleppo, have we all forgotten how American forces launched an airstrike in Afghanistan that hit a hospital and killed people from Doctors without Borders among others? Entire wedding parties of up to 100 people were killed in Afghanistan. Look at what has just happened in Yemen, where a single strike killed 170 people and injured 500 at a funeral ceremony.

The sad reality is that wherever military operations take place, innocent people suffer and die. But we cannot allow terrorists to hide between civilians used as a human shield. We cannot allow them to blackmail the entire world when they take hostages, kill, or behead people.

If we want to win the fight against terrorism, we must fight the terrorists and not let them take the lead, not waver and retreat.

Vladimir Putin: Let me explain. It is another terrorist group, Jabhat al-Nusra, that controls the situation in Aleppo. This group was always considered a wing of Al Qaeda and is included in the UN’s list of terrorist organisations.

What we find particularly depressing and hard to understand is that our partners, especially the Americans, are always finding a way to try to exclude this group from the list of terrorist organisations. Let me tell you why. It seems to us as though our partners are always repeating the same mistake. They want to use these terrorist organisations’ and radicals’ combat potential to pursue their own political aims, in this case, to combat President Assad and his government, and do not understand that they cannot simply stall them [the rebels] and get them to live by civilised rules after they have tasted victory over someone.

We have reached repeated agreements with the Americans that they will differentiate between Jabhat al-Nusra and its like and the so-called healthy opposition forces, including in Aleppo. They have agreed that this is necessary. What’s more, we have even agreed on concrete deadlines, but nothing is done from one month to the next.

We recently reached a ceasefire agreement, a D-day agreement, as our American friends said. I insisted that they first of all resolve the matter of separating Jabhat al-Nusra and other terrorists from the healthy opposition forces and only then declare the ceasefire.

But the Americans insisted that we first need to declare a ceasefire and then they will take care of separating the terrorists from the non-terrorists. Finally, we agreed to make concessions, agreed to their terms, and on September 12 declared a day of silence and cessation of hostilities. On September 16, American aircraft launched a strike against Syrian army forces that killed 80 people.

At this same moment, immediately after the airstrike, ISIS launched an offensive in this very same place. Our American colleagues told us that this airstrike was made by error. This error cost the lives of 80 people and, also just coincidence, perhaps, ISIS took the offensive immediately afterwards.

At the same time, lower down the ranks, at the operations level, one of the American military service personnel said quite frankly that they spent several days preparing this strike. How could they make an error if they were several days in preparation?

This is how our ceasefire agreement ended up broken. Who broke the agreement? Was it us? No.

Question: The possibility of a new cold war is being discussed, but there is at least one American who likes you – Donald Trump. What do you think about him? Do you like him?

Vladimir Putin: We like everyone. America is a great country, and Americans are interesting, amiable and talented people. They are a great people and nation.

We will work with whomever the Americans elect. Of course, it is easier to work with those who are willing to work with you. If Trump says he wants to work with Russia, we appreciate this. But it must be mutually honest.

Look, everyone is talking about humanitarian access in Aleppo. Everyone is trying to convince us that we should do this. But they do not need to convince us, because we believe it too, we believe that a humanitarian convoy should be sent there. But how can this be accomplished? There is only one road the convoys can take, with militants on one side of the road and the Syrian army on the other side. We know about the provocation, the attack on one of the convoys, and we know for certain that the attack was delivered by a terrorist group.

We have suggested that the militants and the Syrian army both pull away from the road, providing safe transit for the humanitarian convoys.

Everyone agrees, and the idea has even been put on paper, and then nothing happens; none of our partners are doing anything. They either do not want to or cannot pull the militants back, I do not know which.

An exotic proposal has been made – I am going to surprise you and your audience. It has been proposed that our armed units, Russian military personnel, be deployed on the road to ensure transit safety. The Russian military, who are courageous and decisive people, have said they would do it.

But I told them that this could only be done jointly with the US, and ordered them to make the proposal. We have proposed this, and they [the Americans] promptly refused. They do not want to deploy their troops there, but they also do not want to pull these opposition groups back, who are really terrorists. What can we do in this situation?

We must increase mutual trust and admit that these are common threats, and it is only together that we can curtail and eradicate them.

We have very good ties with the French intelligence services. They really do work on the same wave. This is true of our counterterrorism experts and their counterparts in France and several other European countries. But this is not always the case.

For example, we send our American partners information and often get no response at all. Some time ago, we sent information on the Tsarnaev brothers. We sent the first document, got no response, sent a second document, and got the response that this is not your business, they are US citizens now and we will take care of things ourselves.

The result was a terrorist attack in the USA. Is this not an example of how we end up with losses if we neglect cooperation in this very sensitive area?

We should be busy not with political rhetoric, but with looking for solutions to the situation, including in Syria. What solutions are there? There is only one solution – to convince all parties to the conflict to take the road of political settlement.

I reached an agreement with President Assad and he has accepted to take the road of adopting a new constitution and holding elections on the basis of this constitution. But we have not succeeded in convincing anyone else to take this road.

If the people do not vote for President Assad, there will be a democratic change of power, but without the help of armed intervention from outside and under strict international control, under UN supervision. I do not understand who could find this proposal unacceptable.

It is a democratic solution to the question of power in the country. We remain optimistic though and hope that we will finish by persuading our colleagues and partners that this is the only possible solution to the problem.