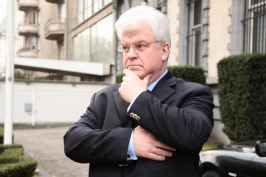 Permanent Representative of the Russian Federation to the EU Ambassador Vladimir Chizhov's interview with EurActiv, 9 October 2015

EurActiv: We are discussing just as Turkish President Recep Tayyip Erdoğan, who has visited Brussels, returned to his country , while NATO reacted to Russian violations of the Turkish airspace, saying that it will send troops there to defend its ally. And Mr Erdoğan said he wouldn’t buy Russian gas and was prepared to abandon plans for building a Russian nuclear power plant in Southern Turkey. How would you comment?

Ambassador Vladimir Chizhov: We’ve seen several cases of nervous reaction. As far as NATO is concerned, obviously the alliance wants to be seen, to be part of the picture, making vague and unsubstantiated allegations. I will not comment on President Erdoğan’s statement. He has an election coming up, doesn’t he?

Vladimir Chizhov: That in itself creates a tense situation in any country, which I would say is normal. We consider Turkey as a friendly country, as a major partner, not only in energy, but in other areas as well. And I understand that all lines of contact between Moscow and Ankara are open. Including military to military. The Russian military are in an on-line mode of contact with the Turkish military, to discuss any issues that might arise.

EurActiv: I know that you are not Ambassador to NATO, but still: the issue of airspace violations is very high in the news, obviously Russia needs, in the context of its military engagement in Syria, to get across a number of countries, this is how it violates their airspace…

Vladimir Chizhov: Not necessarily violating. A number of countries have given their consent, including countries that together with Russia and Syria, have sent their representatives to a military coordination centre in Baghdad.

Vladimir Chizhov: Both Iran and Iraq. So that may explain to you the ease with which Russian cruise missiles launched from the Caspian Sea reached the territory of Syria yesterday.

EurActiv: They have to overfly the territory of Iran, maybe a little bit of Iraq, and they reach Syria.

Vladimir Chizhov: Yes. Of course, when cruise missiles are sent, I’m not sure they need an overflight clearance from air controllers, but still our partners were informed of the use of cruise missiles in advance. That was confirmed by the Russian Ministry of Defence.

EurActiv: Did the Russian side inform its Western partners?

Vladimir Chizhov: We invited our Western partners, including the US, to participate in this joint coordination centre. They declined. Also, in response to those vague allegations that ostensibly the Russian Air Force was hitting the wrong targets in Syria, we suggested that the United States and the US-led coalition provide us with their information regarding the exact positions of ISIL. And they refused to do that.

Vladimir Chizhov: But if we are fighting the same enemy, why should it be confidential to each other?

EurActiv: Are you ready to provide the same information?

But even Turkey, who knows the region well, said that out of maybe 57 Russian strikes, only two had been against the Islamic State, and the rest was against forces who are not loyal to Assad.

Regarding these claims, 2 of 57, nobody, not Turkey, nor the US, nor NATO, have provided any evidence. They could say: you hit this and this, here were forces of such and such opposition group, and you hit them. Nobody has done that.

Now, we are being asked: does Russia consider all forces opposing the Assad government as terrorists? No. We consider terrorists those, as [Foreign] Minister Lavrov described, who act like terrorists, who shoot like terrorists, who employ terrorist tactics and strategy. For example, we are occasionally asked what we think of the Free Syrian Army [a group of defected Syrian officers and soldiers]. Well, we do not consider the Free Syrian Army to be a terrorist organisation. We believe that this group, which has not only a military, but also a political agenda, could be part of the ensuing political process. And we would be happy to come in contact with them. But nobody is telling us where they are and who they are. Nobody has given a name – who is in charge of this Free Syrian Army.

So the whole situation is a little vague.

EurActiv: Who is the real enemy of the Americans in Syria? Is it the Islamic State or is it Russia?

Vladimir Chizhov: Certainly President Assad is not their friend. You see, the Americans and others, including countries with immediate interest in the region like Australia, including France as of recently, have been bombarding areas of Iraq which is perfectly legal. Because they responded to a request from the legitimate and internationally recognised Iraqi government. There is no problem with that. But in Syria not only did they not get consent from the Syrian government, they didn’t ask for one. So they are on the wrong side of international law, to put it squarely. From a practical point of view, they’ve been involved in this bombing campaign for over a year now. I saw a figure in the press of some 9,000 sorties by the US-led coalition. So what is the result? Has the number of ISIL fighters gone down? No. Their territory keeps fluctuating but they are still in control of large chunks of territory in both Iraq and Syria. They are now actually spreading their tentacles further in different directions, including Libya. You know, in the major city of Sirt, on the Libyan coast, which is a major oil exporting hub, there are visible black flags of ISIL and graffiti on the walls – “we are already here”.

EurActiv: Who is the real enemy of the Turks? Is it the Islamic State or the Kurds?

Vladimir Chizhov: I think if you put both, but in the opposite order, you will get the answer.

EurActiv: Who is the real enemy of Russia?

Vladimir Chizhov: The real enemy of Russia is international terrorism. It’s ISIL, but not limited to ISIL. Jabhat al-Nusra [sometimes called the al-Qaeda in Syria], which is an offspring of al-Qaeda, is as lethal as ISIL. Perhaps smaller in size, but as dangerous as the other.

EurActiv: But you would perhaps agree with me that due to the fact that the big international players are confused who is the enemy, that’s why ISIL is winning?

Vladimir Chizhov: Yes, I agree. Because we should put our priorities straight. If we are there to fight our common enemy, actually an enemy of the whole civilised world, we should concentrate on that, and not engage in double games.

Let’s look with open eyes at the situation in Syria. Who is fighting ISIL on the ground? A few weeks ago President Putin said you cannot win such kind of war with airstrikes only. We still believe that. But who is fighting ISIL on the ground? It’s the Syrian army. The best fighting force. It may not be perfect, it may be not be best equipped, but still the main fighting force against terrorism in Syria is the Syrian army.

Will there be a time for diplomacy? A time when Russia and major players, the USA, the EU, Turkey, Iran, Saudi Arabia, probably these are the stakeholders, will sit around a table as they did for the Iran nuclear talks and try to agree on a solution?

And as far as the political process is concerned, yes, there needs to be a political process, there need to be political reforms, reform of the government, of the overall structure of the government, constitutional perhaps, economic rehabilitation and everything. But let’s not forget: Syria is a sovereign country. Whether someone likes the current president or not, he has been elected, and he is supported by a large portion of the population. Otherwise the Syrian army wouldn’t be fighting.

EurActiv: But the West has invested so much political energy in repeating that talks are not possible with Bashar al-Assad…

Vladimir Chizhov: I understand that this position has evolved somewhat. Major Western countries have been saying publicly that they see a political process with the participation of the current government, but that ultimately the process will lead to a change. Well, any political process should involve, in our view, the government and the patriotic opposition. But certainly not ISIL and the like.

EurActiv: Is there a link between the two fronts? We can say that all’s quiet now on the Eastern Ukraine front, since the Southern front has become active.

Vladimir Chizhov: I would suggest that we should refrain from conspiracy theories trying to tie together two different conflicts.

EurActiv: But maybe it’s easier for Russia to handle one front at the time?

Vladimir Chizhov: It would be easier for Russia not to have to handle any of those. These were not conflicts of our choice. Actually there’s no conflict in today’s world which is of Russia’s choice.