Ambassador Vladimir Chizhov's address on “Global Governance Reform: A Chance for Strategic Cooperation between the EU and Emerging Market Economies” 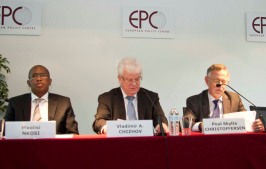 Address by Permanent Representative of Russia to the EU Ambassador Vladimir Chizhov at the EPC Policy Dialogue event on “Global Governance Reform: A Chance for Strategic Cooperation between the EU and Emerging Market Economies”. Brussels, 10 December 2015

It gives me great pleasure to address the increasingly popular and, indeed, very important issue of global governance.

Today it is becoming steadily apparent that the transition from a bipolar to a multipolar world is still far from complete. Growing connectivity and interdependence are matched by mounting insecurity. Improving access to health and education contrasts with widening zones of chaos. And complex transnational challenges often seem to invite ill-considered unilateral responses – at times political, economic and even military.

For these reasons, if nothing else, it should be in our common interest to shape an effective system of international governance. One that would be capable of meeting existential threats like ISIS or climate change head on, while balancing legitimate national interests.

Russia, having been one of the authors of the concept of multipolarity back in the 1990s, is driving the search for a new framework of global governance.

Let me turn first to BRICS. In our view, this is a prime indicator of the changing global landscape, literally a sign of the times. Today the BRICS states make up 43% of the world’s population, a third of its industrial, as well as half of its agricultural production. In other words, collectively these countries represent a vast and growing market, as well as a key driver of the global economy. Sure, some skeptics will point out that the economic pace of the BRICS countries today may be below those of the roaring 2000s. But that factor should not be overstated. BRICS has acquired an economic momentum that transcends quarter-to-quarter statistics. Today it is an indispensable part of the global business reality – both on “sunny” days and “rainy” ones. Even in June 2015, according to the “Financial Times”, their overall contribution to global economic growth was 1/3 (and 52% if you factor in purchasing power parity). Moreover, in our view, BRICS represents what international cooperation should look like in the 21st century – namely, on the basis of equality and mutual respect, with a positive agenda and without a confrontational bloc mentality.

Closer to my own country, the Eurasian Economic Union is yet another piece of the mosaic shaping today’s world. By tapping into naturally preexisting regional linkages the process of Eurasian integration is creating a mutually-rewarding network of free movement of capital, goods and labour.

And the process does not end there. As new platforms of governance evolve, their natural instinct is to reach out to other like-minded structures and initiatives. Just a few examples. A basic agreement has now been reached on combining Eurasian integration with the Chinese Silk Road Economic Belt. The BRICS countries are coordinating their positions on the G20 agenda to better accommodate interests of emerging market economies. And last week in his annual speech to the Federal Assembly President Vladimir Putin proposed to use next year’s Russia-ASEAN summit in Sochi to consider forging an economic partnership between the Eurasian Economic Union, the Shanghai Cooperation Organisation and ASEAN.

In other words, a new order of global economic governance is taking shape as we speak. The interplay between emerging centres of power is becoming a natural and irreversible feature of globalisation that is beyond external control. Let me be clear: this is a win-win situation for all – to use the terminology of Niall Fergusson, for both “the West” and “the Rest”. Enabling greater “buy-in” and “ownership” for emerging actors will make the international system more inclusive, legitimate and stable. It would also help moderate the dire consequences of dividing lines between North and South, dating back to colonial times, but still omnipresent, and in many cases still stoking conflict and radicalism. Our hope is that greater proximity between European and Eurasian integration will over time alleviate the bitter legacy of the East-West divide in a similar manner.

One should not fall into the psychological trap of believing that the BRICS and other emerging actors are out to overturn the long-reigning system of global governance that has largely benefitted the West. This is not the case. Nor is it the intention. Indeed, as some analysts have correctly noted, most emerging economies have a vested interest in maintaining institutions that have enabled their prosperous and peaceful rise. They are also staunch backers of the United Nations, including its Security Council and proponents of more inclusive initiatives like the Global Counterterrorism Forum and the Financial Action Task Force.

However, structures created by the West, mostly in the wake of the Second World War, are indeed facing a Darwinian challenge to change. This applies particularly to the global financial sector, whose health is critical to the maintenance of production and consumption chains worldwide.

Take the International Monetary Fund, for example. Since 1951 IMF Managing directors have come exclusively from Western Europe and the United States. Collectively five industrially developed countries – US, Germany, France, UK and Japan - command more than 37% of votes in the Board of Governors. The BRICS, on the other hand, have just 11%. It is telling that the Benelux countries cumulatively wield more votes on the Board of Governors than, say, China.

Meanwhile, the reform of the IMF quota system agreed back in 2010, remains deadlocked. The US Administration, citing objections to the proposals in Congress, does not appear to be ready to relinquish its exclusive veto rights. But the problem goes far beyond that. The voting rights reform is closely linked to the increase of the overall financial capacity of the IMF. Thus, by blocking reform efforts, Washington is making it more likely that when the next crisis strikes, the IMF may fall short of its credit resources. This is why in their statement on the margins of the Antalya G20 summit the BRICS leaders made it clear that “the adoption of the 2010 reforms remains the highest priority for safeguarding the credibility, legitimacy and effectiveness of the IMF”.

Unfortunately, instead of heeding this call of the times, the IMF has reverted to a totally different kind of changes, in effect bending its own rules to placate a country teetering on the brink of default. The inevitable detrimental effect of such short-sighted political games to IMF’s credibility as an impartial institution, as well as to the overall international framework of credit and debt management is obvious.

In the absence of genuine efforts to adapt old institutions to new circumstances, it is hardly surprising that emerging economies are beginning to act on their own. Life, as always, finds a way. Think back to the Ufa summit proudly hosted by the Russian BRICS presidency last summer. It saw the establishment of the New Development Bank and the BRICS Contingent Reserve Arrangement with a cumulative capital base of 200 bln. Euros. Meanwhile, in a similar vein, China has proposed the creation of the Asian Infrastructure Investment Bank. Let me reiterate that these initiatives are by no means rivals of their Western-led counterparts. Rather, they are symptoms of impatience of emerging economies with a “business as usual” thinking that fails to grasp the arrival of long-term change. As Indian politician and long-time UN official Shashi Tharoor wrote, “if the BRICS are not allowed to help lead within the existing global system, they will inevitably create their own”. But I am sure my South African colleague will agree that this is not our choice.

Finally, a couple of words about the EU role.

Russia as a country and as a member of BRICS remains interested in the European Union playing a responsible and constructive role in the world. In our view, the EU, being largely a product of globalisation itself, is well-placed to actively contribute to realignment of the system of global governance. It is encouraging that High Representative Federica Mogherini in her recent speech at the Hague Institute acknowledged that “the EU cannot be a conservative player in global institutions and must be a driver of change”. In particular, we welcome the EU’s stated intention to facilitate reform of the IMF system of quotas and votes. Now, as far as we understand, the EU has a new argument to back up its case, namely the desire for a single IMF seat for countries of the Eurozone. Hopefully, compromise solutions may be hammered out in the course of bilateral and multilateral contacts on this key topic.