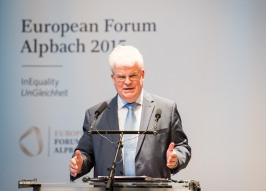 Address by the Permanent Representative of the Russian Federation to the EU Ambassador Vladimir Chizhov at the Alpbach Forum panel “The EU and Russia: Rivals, Opponents, Partners?”. Alpbach, 31 August 2015

2015, with its many historical reminders of glorious moments of the past and a string of daring present-day diplomatic breakthroughs, will hardly circumvent the legacy of two other memorable events celebrated this year. The first is the Congress of Vienna exactly two centuries ago, which elaborated the peace plan for a post-Napoleonic Europe. The second is the conclusion 60 years ago of the Austrian State Treaty that reestablished an independent and democratic Austria. There are several reasons to single them out: both events took place in Vienna, the capital of our host country, both involved Russia in its respective historical incarnations, and both were instrumental in creating a peaceful order in a post-war environment. Key to their success, it would appear, was their inclusive nature, pointing a clear path to the future while guaranteeing a fair balance of respective powers and interests.

Today, amidst geopolitical upheaval in our common neighbourhood Russia and the EU find themselves in a situation very much reminiscent of those older times. Once again there is a pressing need to arrive at a mutually acceptable equation, which would reconcile regional security with modernity and progress.

Are Russia and the EU still able to negotiate and come to agreements in good faith? Absolutely yes. The recent deal on the Iranian nuclear programme, reached once again in the capital of Austria, is clear proof of that.

However, what is at stake today in our relations is, I believe, of far more immense proportions than even the Iran question. It is about the future of the European continent, of which both Russia and the EU are part. The Ukraine crisis has finally confronted us with the decisive question of whether Russia and the EU are genuinely able and willing to construct an indivisible pan-European security and economic architecture that would pursue cooperative “win-win” scenarios, or, instead, we are doomed to going about our separate ways.

Russia has never avoided this difficult question. In fact, ever since the break-up of the Soviet Union we have been tackling it head on, consistently favouring continent-wide solutions based on the rule of international law, sovereign equality and mutual respect of interests and concerns. This logic lay at the core of our efforts to conclude the 1997 Founding Act and five years later establish the Russia-NATO Council. It led us to sign the 1999 OSCE Charter for European Security in Istanbul that explicitly precludes European and North American states from “strengthening their security at the expense of the security of other states”. It was also this logic that prompted us to initiate the reform of the OSCE in 2004, to propose a draft Treaty on European Security in 2009 and reach out to the European Union with a plan for a Single Economic and Humanitarian Space from Lisbon to Vladivostok. All those ideas, unfortunately, were shot down by our Western partners under different pretexts.

As for the European Union, since the beginning of the 1990s we have strived to achieve a mutually beneficial and interdependent relationship. In spite of many setbacks, we have come a long way. Prior to the onset of the Ukraine crisis Russia and the EU used to trade at the level of 1 billion euros a day, the volume of our trade having tripled between 2002 and 2012. Even today Russia remains EU’s third biggest trade partner and No.1 energy supplier. The human fabric of our relations grew ever stronger, as more and more Russian and EU citizens traveled in both directions and clamoured for visa-free access. The “Partnership for Modernisation” initiative, jointly launched in 2010, endowed our relationship with an innovative forward-looking philosophy of drawing upon each other’s comparative advantages.

Obviously, I am far from trying to idealize the relationship. It was increasingly subject to systemic flaws and limitations, which were remedied, to a certain extent, via our structured channels of communication at various levels. In particular, the internal transformation of the EU following the “big bang” expansion of 2004 and the subsequent Lisbon Treaty reform, resulted in narrowing the flexibility of EU’s positions in the international arena. In other words, the price for “speaking with one voice” has been the lowest common denominator of the resulting message. On many topics of mutual importance, like crisis management, Russia was often confronted with a “take it or leave it” approach that often seemed to negate our concerns and interests.

On the other hand, EU’s aspiration to become a regional “normative power” implied the growing projection of the EU acquis to its relations with third countries. Communitary norms, adopted by 28 Member States, are increasingly considered by the EU to be somehow superior to other international legal arrangements, including those previously concluded by EU Member States with third countries. Nowhere has this been clearer than in the cases of the “Third Energy Package” and the highly controversial EU Emission Trading Scheme. Occasionally, this puts the EU itself in a legally vulnerable position, as has been amply illustrated by the procrastination – in contravention of its own Lisbon Treaty – of EU’s accession to the European Convention on Human Rights.

On top of that, we have been witnessing with understandable concern the establishment of an exclusive ideological underpinning of the European Union. Let us not forget that peace and reconciliation were at the heart of the European project ever since the creation of the European Coal and Steel Community in 1951. Democratic values were viewed largely as a means of achieving this goal. Yet today the EU is a very different creature. The inward-looking peace project has acquired a new somewhat messianic dimension – the EU now “seeks to advance in the wider world… principles which have inspired its own creation” (Art. 21 TEU). The question is, however, whether this “export of democracy” is consistent with the objective of maintaining peace inside and beyond the European continent, or the European Union will have to make a hard choice between the two.

These worrying trends have converged in Ukraine. May I remind you that back in May 2013 EU high officials were making it clear that the Vilnius summit of the Eastern Partnership later that year would be about “winning Ukraine” in a “geopolitical battle of Europe” . This was clearly a wrong approach. Ukraine should have never been viewed as a geopolitical playground. Rather it is an economically fragile and ethnically and culturally diverse country, rife with internal contradictions. It is equally hard to imagine western Ukrainians sporting the ribbons of the Order of St. George, a symbol of military glory and of victory over fascism in WWII, and eastern Ukrainians paying respect to the memory of Stepan Bandera, a war criminal and Nazi collaborator whose birthday is officially celebrated in today’s Ukraine. What Ukraine really needs is a common national identity, sufficiently ample to embrace all ethnic and linguistic groups inhabiting the country. But for such an identity to take root, time, stability and good relations with both the EU and Russia are of essence. This must be clearly understood.

Unfortunately, the Ukrainian crisis has reinforced our view that the notion of “strategic partnership” with the EU remained largely a slogan – shiny on the outside, yet hollow and insincere. It did not help things that EU decisions on so-called “sanctions” were taken under significant pressure from Washington – something US Vice-President Joe Biden later openly admitted.

And now the million-euro question: how to develop our relations into a win-win situation for both parties? For starters, we should not aim at returning to “business as usual”. Simply “resetting” the relationship, to use a trendy term, will not remove its underlying systemic flaws.

First of all, the relationship should become a genuine partnership of equals, ensuring that mutual concerns are systematically and thoroughly addressed.

We should not lose sight of the strategic horizon. As Russia becomes more integrated into the Eurasian Economic Union, the European economic order will be increasingly defined by the interplay between the EEU and the European Union. The long-term goal of establishing a free-trade area between those two bodies of integration should remain on the table. For a start, it would be expedient to set up initial working contacts between the European and the Eurasian Economic Commissions. It is welcoming that many within the EU are finally coming round to this idea.

Secondly, economic cooperation between Russia and the EU, into which we have invested a lot of time and effort, remains an important “safety cushion”. Not only does it provide jobs and growth across the European continent, it also insulates our countries from political tensions. This “cushion” needs to be strengthened, not weakened. According to figures produced by the Austrian Institute of Economic Research (WIFO), the restrictive measures against Russia are set to cost the EU as much as 100 bln. euros and more than 2 million jobs. This, in my view, is hardly what the EU needs in the current volatile economic environment.

Thirdly, the relationship must become less ideological and more pragmatic. The relentless anti-Russian rhetoric in the Western media, which, sadly, is reenacted in some EU institutions, can hardly be qualified as a strategy in relations with Russia. It is merely a feeble substitute. In the words of a famous German (or should I say, European) statesman and military leader Otto von Bismark, one should either deal with the Russians in a fair way, or not at all.

And last but not least. Russia and the EU need to jointly deal with the manifold crises unfolding in our so-called “common neighbourhood”. In the Russian view, which, I understand, may not be universally shared by this audience, the disastrous turn of events in the region of the so-called “Arab spring” as well as in Ukraine has a lot to do with the attempt to inject the notion of supremacy of Western values into highly complex regional environments. Certainly, EU alone can hardly be blamed for regional instability. Nevertheless, the European Neighbourhood Policy, in my view, was not made any more attractive by the heavy-handed manner in which the EU sought to “civilize” the region and impose its own norms and standards there.

As key regional actors, Russia and the EU bear prime responsibility for regional stability. Today our countries are faced with a multitude of challenges that do not stop at borders – terrorism, illegal migration, drug and human trafficking, climate change. In order to combat these acute threats, Russia and the EU have invested substantial efforts into creating a complex architecture of channels of communication, including practical cooperation between security, military and law-enforcement agencies. Yet today, because of EU’s position on the Ukraine crisis, much of this work has come to a standstill. Meanwhile, just like we warned, while Russia and the EU severely limited their cooperation, the terrorists did not.

Obviously, being both a European and Eurasian power, Russia will not blindly turn away from the EU. Cumulatively the European Union will for the foreseeable future remain its key trading partner and investor. And, despite our current differences, Russia continues to believe in its mission as a historical, religious, linguistic and cultural centre of gravity within the great European civilization. Nevertheless, as evidenced by the twin summits of BRICS and the Shanghai Cooperation Organization (SCO) held in early July in the Russian city of Ufa, the world around us is changing fast. Therefore in pondering the future of the Russia-EU relationship and the choices we face together, I believe, we should think pragmatically and realistically, but also strategically.