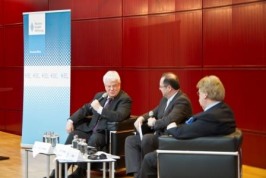 On 18 February a public debate took place in Brussels between Ambassador Vladimir Chizhov, Russian Permanent Representative to the EU, and Elmar Brok, Chairman of the European Parliament Committee on Foreign Affairs.

In the course of an interested discussion the participants highlighted the importance of enhancing Russian and EU efforts in establishing equal and mutually beneficial strategic partnership, as well as in searching for opportunities to harmonise Eurasian and European integration processes. A lively exchange of views also took place on the situation developing in Ukrane.

The event was organised by the German Hans-Seidel-Stiftung and the European Security Round Table. The discussion became a notable event in Brussels and attracted significant attention of MEPs, representatives of the diplomatic corps and academic community, as well as journalists.