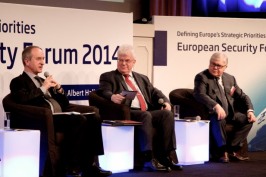 On 18 November 2014 Permanent Representative of the Russian Federation to the EU Ambassador Vladimir Chizhov participated in a section “Recasting European Security Policy – European Political Response to the Ukrainian Crisis” of the European Security Forum-2014, organised in Brussels jointly by the European Security Round Table, Konrad Adenauer Stiftung, Fondation pour la Recherche Stratégique and Kangaroo Group in cooperation with EPP and S&D Groups in the European parliament.

Participants discussed different challenges for European security that were posed by the situation in Ukraine. The panel examined actions undertaken by the EU as the events unfolded and its role in working out a political resolution of the crisis. A necessity to restore EU-Russia relations was underlined by the majority of speakers.