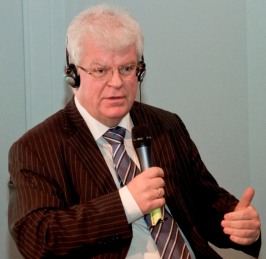 On 7 November 2014 Permanent Representative of the Russian Federation to the EU Ambassador Vladimir Chizhov participated in a section on Russia-EU relations of the conference “Good Morning Europe, now or never!” organised by the French “Nouvel Observateur” magazine in Brussels. Permanent Secretary of Académie Française, Helene Carrère d’Encausse and MEP from the European People’s Party, former French Government Minister Alain Lamassoure were the Ambassador’s co-speakers.

The discussion revealed concern of the reasonable European intellectual circles with the confrontational policy pursued by the US and EU member-states towards Russia. The stake on maintenance and eastward expansion of Euro-Atlantic military and political structures made by the West in the early 1990’s was characterised by the participants as a fundamental mistake that resulted in erosion of the common European security system. They emphasised the responsibility of Western countries for building up the internal political crisis in Ukraine. The fact that the current conflict in Donbass should be settled only through a dialogue between Kiev authorities and their opponents in the South-East of the country was not called into question.