Ambassador Vladimir Chizhov on the situation in the Western Balkans 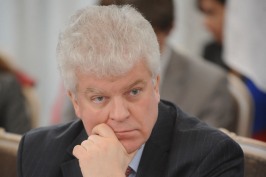 Comment for Euractiv by Permanent Representative of Russia to the EU Ambassador Vladimir Chizhov on the situation in the Western Balkans, 14 March 2017

When I read statements by high officials of the EU, including European Council President Donald Tusk himself, mentioning outside interference in Macedonia, I take them as expression of self-criticism on his part. When Commissioner Hahn is addressing the Macedonian President, telling him he should not interfere in the constitutional process of his country – I ask isn’t the President the head of state and the guarantor of the Constitution?

In 2003, the Ohrid agreement was brokered by nobody else but my good old friend Javier Solana, and I pointed out to him then the possible dangers of that agreement, which fixed a quota for Albanian representation. Actually, I asked him if he would follow this example in the Baltics, but didn’t get much of an answer.

The Albanian parties were summoned to Tirana, to the office of the Albanian Prime Minister, and signed what is now referred to as the Albanian platform, which would expand the rights of the Albanian minority to a level on par with what in other countries is part of a federal structure. The leader of the opposition Zoran Zaev accepted this platform, which is contrary to the Macedonian constitution. The EU neglected all this, saying: this coalition has 67 seats out of 120, so he should be Prime Minister and let the process go in that direction. Which of course President Ivanov could not accept. The EU should have played a more positive role, rather than a detrimental one.

On the Belgrade-Pristina Dialogue:

The situation regarding the Belgrade-Pristina dialogue started to worry the EU, not only us, with the Kosovo assembly actually walking out. But I believe that’s a result of the biased approach of the EU. When the story of the so-called amphitheatre in Mitrovica unfolded (the local Serbs built a concrete structure in the form of an amphitheatre to prevent vehicles from crossing the bridge, and Pristina went ballistic, demanding it should be removed) the EU intervened, and they made the Serbs agree that they would demolish the amphitheatre, and that in exchange the Kosovars would remove their special forces from the southern end of that bridge. But what about the obligation of Pristina to create an assembly of Serb municipalities? Not only the Kosovars, but also the EU is not referring to it anymore.

Regrettably, in Montenegro an anti-Russian hysteria is taking place, supported by the US and by some EU member states. The so-called coup attempt allegation has never been substantiated, and even less the alleged Russian link.